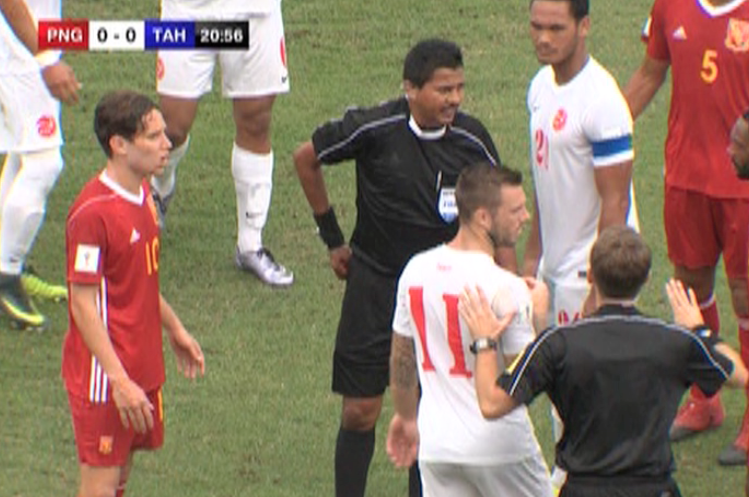 Acting President of the Papua New Guinea Football Association, John Wesley Gonjuan, says that an appeal is already underway, regarding the sendoff of David Browne.

Gonjuan says that world governing body, FIFA has already been informed via the Oceania Football Confederation.

This comes about after the red card, given to Browne, during the match between PNG and Tahiti.

In the 19th minute of the first half between PNG and Tahiti, European-based David Browne had gone up for a header against defender, Taumihau Tiatia.

The incident however, was not attended to immediately by referee Salesh Chand, and television footage appears that the constant harassment by Tahiti players may have had an influence on his decision.

Also despite the fact that there was a physical and aggressive approach taken by Tahiti players on members of the PNG team, that there was no action taken then.

Gonjuan, who was part of the delegation from PNG football watching the match, is hopeful that a decision by FIFA will be a positive one for PNG.

The Browne incident overshadowed much of the match, with the subsequent result that PNG would lose their first home match since June 2016.

Gonjuan however, is positive that other players will be readily available for PNG, when the national team travels to Papeete, Tahiti tomorrow, for the second leg of their qualifying match.

After Tahiti, it will be another two months, until PNG’s next two matches, this time against the Solomon Islands.

With the first match to be played in Honiara on June 5 and the return leg to be played at the Sir Ignatius Kilage Stadium on June 13.

United close to knockout stage with 2-0 win over Benfica