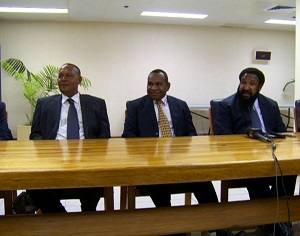 The Opposition is lobbying to form an alternative government to replace the O’Neill-Dion government.

Opposition Leader Belden Namah and Opposition Deputy Sam Basil welcomed the move by the Members of Parliament. They included Kandep MP and THE Party Leader Don Polye, together with THE Party members Kikori MP Mark Maipakai and Rai Coast MP James Gau.  Another new member of the Opposition is Member for Laigaip-Porgera, Nixon Mangape.

The Opposition started off with 25 Members of Parliament but the number decreased over time as most members were allegedly deprived from accessing District Services Improvement Funds which forced them to join the O’Neill-Dion government.

So far, there are 8 Opposition members, with 10 more expected to form the alternative government. The Opposition has maintained that it’s not about the numbers but about ethics.