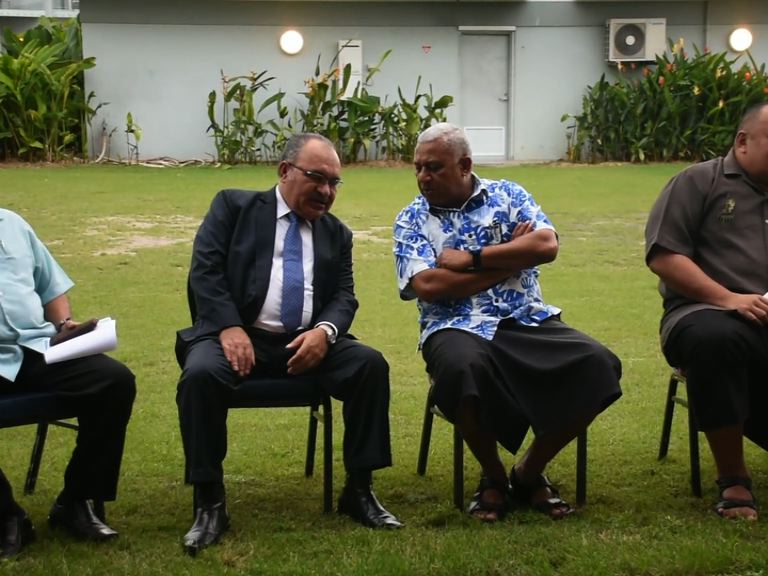 There wasn’t much fanfare for Prime Minister, Peter O’Neill, as he arrived in Fiji on Thursday, March 16, ahead of the Regional Preparatory High-Level Meeting.

The meeting is being held in preparation for the United Nations’ Conference on Oceans.

He and other leaders of Pacific Small Island Developing States (PSIDS) were met by Fiji’s Prime Minister, Frank Bainimarama.

The aim of the Meeting is to support the Implementation of the Sustainable Development Goal 14, which aims to conserve and sustainably use the oceans, seas and marine resources for sustainable development.

Mr. O’Neill said the meeting is about building consensus to bring the global community together to prevent marine resources that are being destroyed.

PNG Marine Expert, Professor Chalapan Kaluwin, had spoken to EMTV on a recent episode of Tok Piksa about getting the UN to respect the region’s position, which will be a challenge if the region does not get its act together.

The leaders are working on an agreed regional position for a draft resolution on the “Call for Action” to be considered at the UN Conference of Oceans to be held in June later this year.

The Prime Minister called on island nations around the world to work together to protect marine resources.

MVIL To Open Branch in Manus