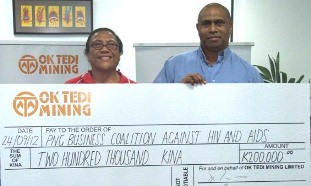 A K200, 000 cheque was presented to the PNG Business coalition against HIV and AIDS yesterday by the Ok Tedi limited as part of its ongoing support to BAHA for HIV prevention and support in the private sector.

The Ok Tedi General Manager for Government and external relations, Mr Musje (pronounced as Mushe) Werror, acknowledge the work of BAHA in ensuring education and training of workers in PNG in HIV/AIDS and related issues.

Mr Musje commended BAHA on reaching out to the rural business sectors out in the provinces.

In response, the General Manager of BAHA, Caroline Bunemiga, thanked the Platinum sponsor for its confidence in continuing its 5 years of support to the work of BAHA in the private sector.

Bunemiga added that BAHA is working with workplaces in ensuring the policies developed are implemented and activities of their organizational HIV trainers are supported and sustained for companies.

Meanwhile, she appealed to other large companies to take on active corporate social responsibilities in the fight of HIV/AIDS.