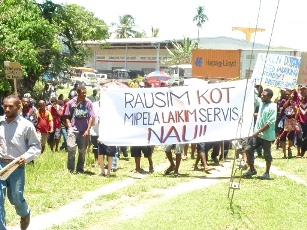 The protest is in relation to losing candidates around the country disputing more than 100 wining candidates.

Among them is Madang Open MP and Police Minister, Nixon Duban.

The protestors mostly youths took to the streets and congregated at the main bus tops today and called on the losing candidates not to challenge Nixon Duban’s win, instead, drop the case and allow the Minister to focus on much needed services.

They said the legal battle will help nobody as it does not represent the people but for their own personnel gain.

The protest march was peaceful with youths behaving in an orderly manner.