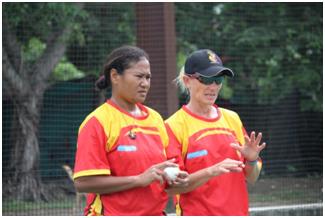 Looking back at the PNG Lewas’ performance in Japan last week in the ICC T/20 EAP Women’s World Cup Qualifiers, Former Australian Fast Bowler and current PNG Lewas Coach, Cathryn Fitzpatrick, says it was no walk in the park.

The high standard competition required adaptation and the Lewas pulled it off well.

Although their loss to Samoa earlier in the round robin format meant, they either improve their net run rate or lose the Region’s top spot to 2015 Pacific Games Gold Medallist, Samoa.

And with much conviction to keep the World Cup in sight, the Lewas’ 6-wicket victory in the decider against Samoa, came as a statement of why they are they are the best in the region.

Now with the World Cup only months away, the coach says improvement areas include fitness levels and their ability to recovery from matches.