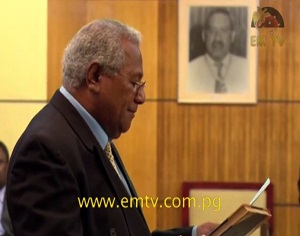 Sir Kina Bona was officially sowrn in as a new Judge to the National and Supreme Courts of PNG by the Papua New Guinea Judicial and Legal Services Commission.

He will serve as a Judge for a term of 10 years.

Sir Bona’s appointment as a Judge brings the total number of Judges of the National and Supreme Courts, to 32.

The Judicial and Legal Services Commission and the Minister for Justice, Ano Pala, recognised him as “a man with a wealth of experience in legal knowledge and administration”.

Sir Bona, from Milne Bay Province, is married with one child.

Sir Bona, has served the legal service of Papua New Guinea with distinction over the years, holding significant posts which included being the President of the PNG Law Society, and has been the Senior Legal Counsel with the Albatross Law Firm since 2013.