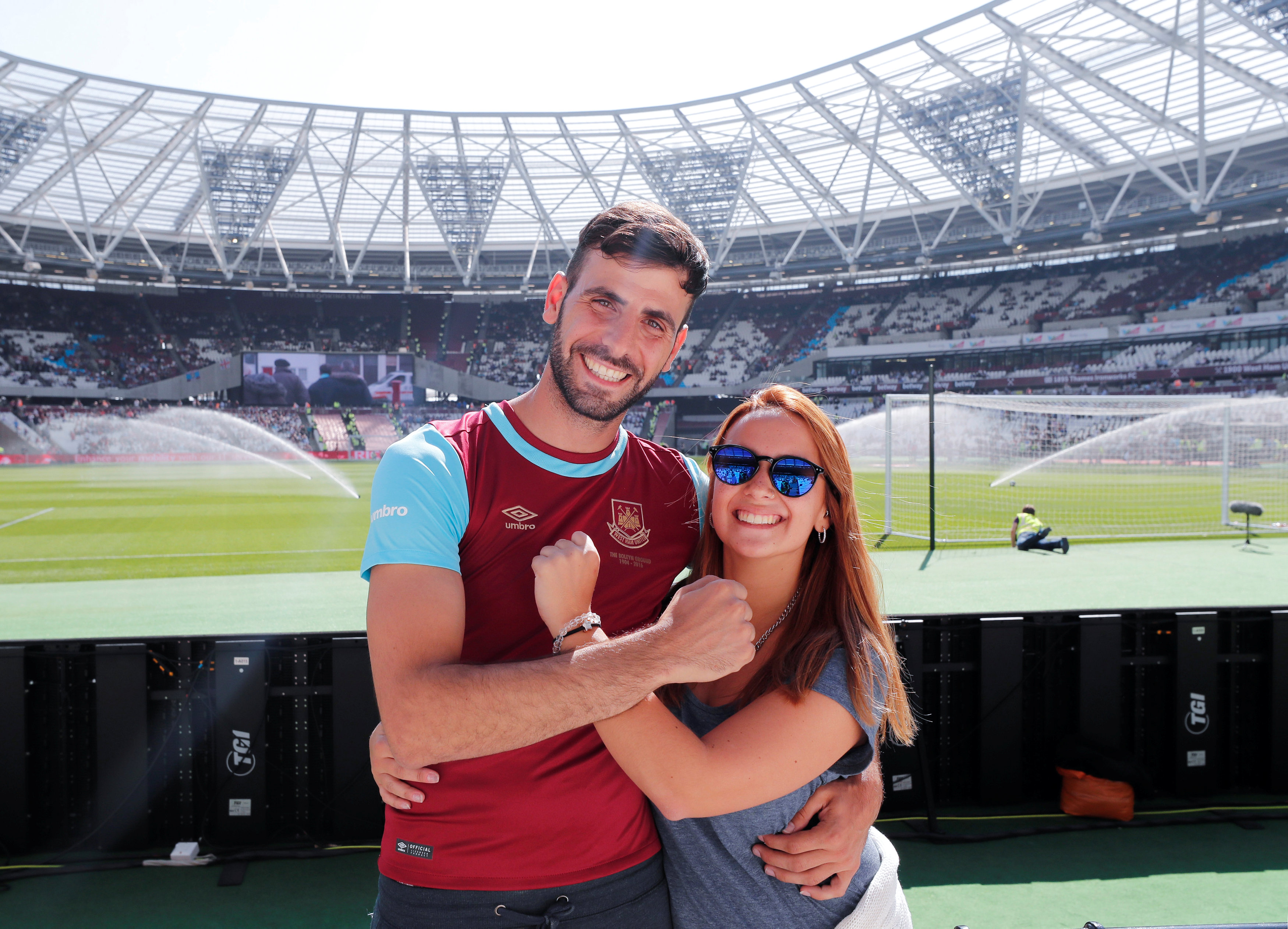 Image: Lawyer Ismael Vitulli from Buenos Aires, poses for a photograph with his girlfriend, at a Premier League soccer match between West Ham United and Swansea City in London, Britain April 8, 2017.  REUTERS/Eddie Keogh

LONDON (Reuters) – When it comes to the allure of England’s Premier League it seems distance is no object for jet-setting fans desperate to witness a slice of the action.

While matches in England’s top flight are routinely beamed live around the globe, for some that is no substitute for actually being pitch-side to watch the household names like Sergio Aguero, Alexis Sanchez and Zlatan Ibrahimovic.

For some attending a Premier League game is simply part of their itinerary during a vacation in Britain – an event to tick off like a West End show or a visit to Windsor Castle.

Others wear the shirt with pride and are as fiercely loyal as any of the diehards who have less far to travel.

It does not come cheap, though.

Matthaus Martins Fontes is a student living in Brazil who travelled 6,000 miles and paid 7,500 pounds for him and his parents to watch his club Manchester City play Arsenal.

“It’s the first time I’ve ever seen a Premier League football match and it’s very special as I watch them every week back home in Brazil,” he told Reuters.

“We are only here two nights but this has been my dream.”

Mary Frisella from San Diego usually watches Everton in an oceanside bar with a small group of fellow Californian Toffees fans but she wanted to experience Goodison Park for real.

She travelled alone but was pleased to discover a large group of U.S.-based Everton supporters at the game.

“I enjoyed starting the journey alone, and once meeting up with the USA group it felt like one big family,” she said.

“It was my first time and I absolutely loved it. I really hope I can find a way to make it happen again next year.”

Nowhere is the appetite for the Premier League more insatiable than in Asia – a popular destination for Premier League clubs for money-spinning tours.

There is nothing like the real thing, however, when Premier League points are on the line.

“The atmosphere is unforgettable and incomparable, so amazing to be part of the fans in the stadium,” he said.

Things do not always go to plan though, especially when games are switched.

William Roberts from Washington D.C booked his trip to watch his favourite team Tottenham Hotspur but when the schedule was changed he could no longer attend.

“The date changed after I booked my flights so I went to watch Southampton instead,” he said.

Brain scans show how LSD mimics mind of a baby