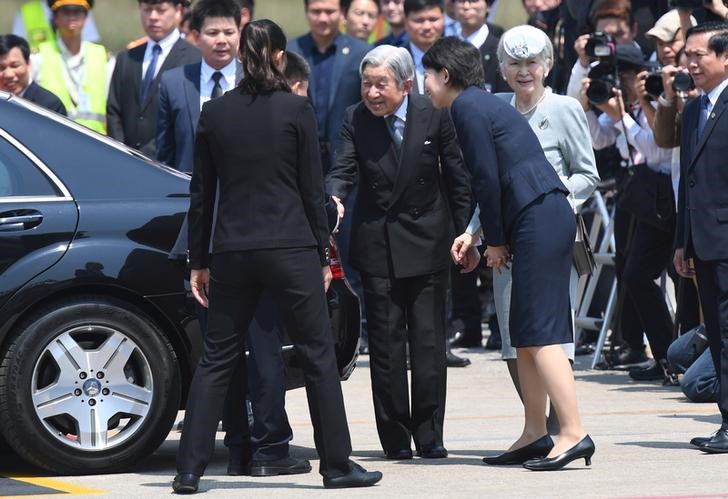 BANGKOK (Reuters) – Japan’s Emperor Akihito paid his respects to Thailand’s late King Bhumibol Adulyadej on Sunday on a visit to Bangkok during which he will also see the new king.

Akihito, 83, and Bhumibol, who died aged 88 in October after seven decades on the throne, had a close personal relationship that stretched back to the 1960s and strengthened ties between the two Asian monarchies.

Akihito and Empress Michiko, 82, visited the ornate Grand Palace, laying flowers and signing the condolence book. Bhumibol’s body will be cremated at an elaborate ceremony towards the end of this year.

Akihito was also due to see King Maha Vajiralongkorn, 64, who took the throne in December after the death of his widely-revered father.

Once considered divine, Japan’s emperor is defined in the constitution as a symbol of the state and the unity of the people. He has no political power, but his trips often have diplomatic overtones.

A key regional concern for Japan has been the rise of China, with which Thailand has forged increasingly strong ties.

On many of Akihito’s overseas visits he has sought to soothe the wounds of World War Two, but Thailand allied itself with Japan and did not suffer casualties to the extent of many other Asian countries.

Akihito last visited Thailand in 2006. His visit to Bangkok came at the end of nearly a week in Vietnam and he will return to Japan on Monday.