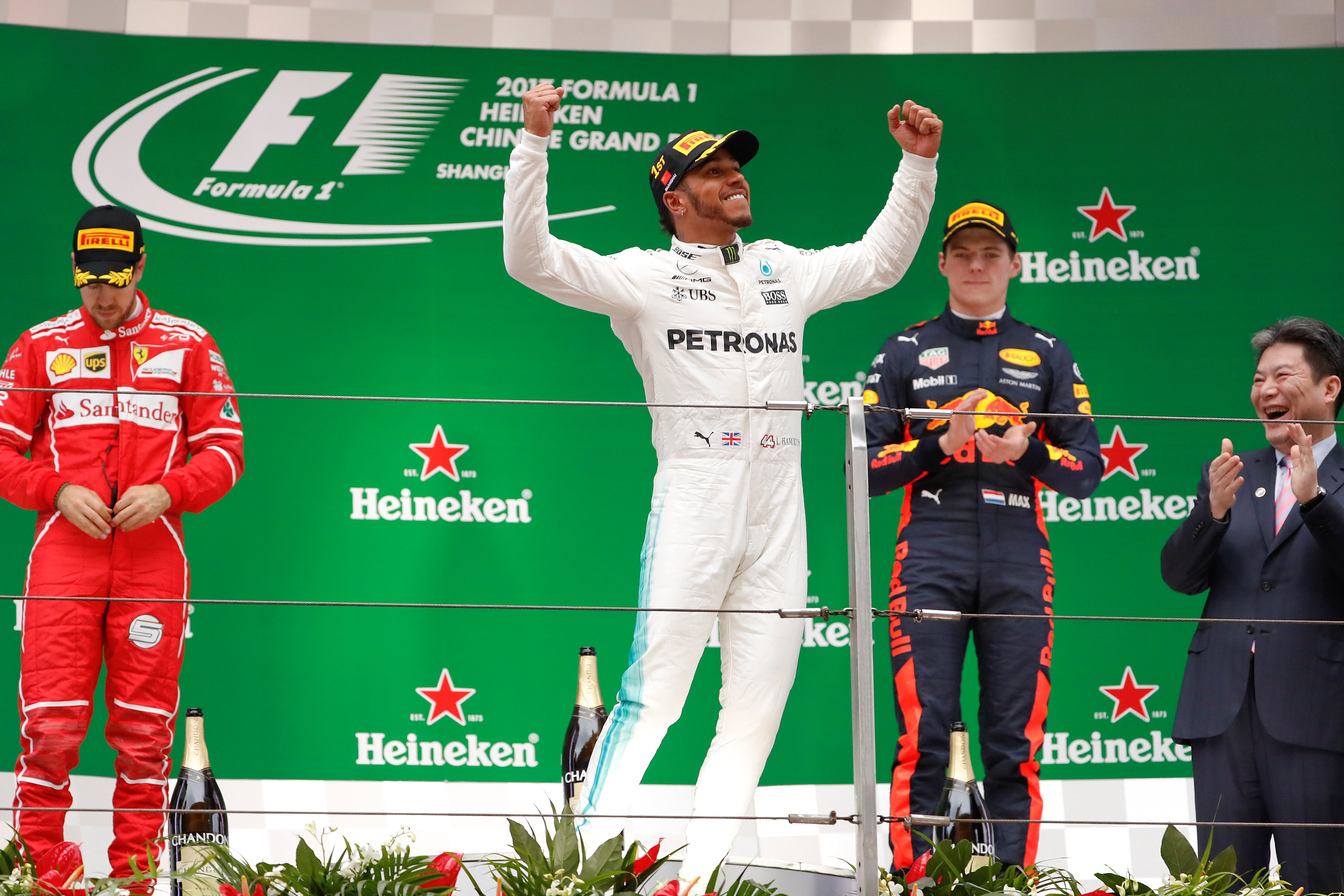 The Briton eased his Mercedes across the line 6.2 seconds ahead of Ferrari’s Sebastian Vettel. Max Verstappen, who started 16th, finished a surprise third to hand his Red Bull team their 100th podium.

It was Hamilton’s 54th career win and a record fifth in Shanghai. But it was the triple champion’s first this season and returned Mercedes to the top of the podium after Vettel won last month’s season-opening race for a resurgent Ferrari.

“I’m so happy with my first win of the year and I can’t believe it if I’m honest,” said Hamilton after the race, which also handed him his 106th podium, putting him joint second with Alain Prost on the list of drivers with most rostrum results.

“What I said to Sebastian as I left the last race … I said I’m coming back in the next one. When I got on the podium it was like ‘I told you’.”

Hamilton, who finished second to Vettel in Melbourne, heads into the next race in Bahrain in a week’s time tied on points with the German.

Mercedes, meanwhile, lead the constructors’ standings by one point over Ferrari.

Hamilton started from pole position, but the conditions were a bit of a lottery for all the drivers with the track damp in patches but drying quickly.

He kept the lead off the line ahead of Vettel, who came under investigation for lining up out of position on his grid slot.

The German, though, stayed second, fending off Valtteri Bottas in the other Mercedes, who had started third.

Lance Stroll, the 18-year-old rookie, spun off the track on the first lap after making contact with Force India’s Sergio Perez. The Canadian beached his Williams in the gravel, bringing out the virtual safety car.

Vettel took the opportunity to dive into the pits to change to dry weather tyres.

His gamble backfired when Antonio Giovinazzi — standing in for Pascal Wehrlein at Sauber — crashed, bringing out the actual safety car two laps later.

The four-times world champion found himself bottled up behind Ricciardo and his slower team-mate Kimi Raikkonen, costing him valuable time. As the trio squabbled for position, Hamilton pulled clear at the front.

By the time Vettel managed to get past, with a series of spectacular overtaking moves that included banging wheels with his former team-mate, Hamilton was too far ahead.

“The safety car came just when I was about to start to feel that the dry tyre was a lot quicker,” Vettel said. “So I couldn’t use the momentum, the advantage and I lost a lot of positions.

“But then I had a very exciting race.”

Ricciardo finished fourth for Red Bull, crossing the line just 0.8 seconds behind Verstappen after hassling the Dutchman in the closing stages of the 56-lap race. Raikkonen crossed the line a frustrated fifth.

Bottas finished sixth. The Finn, who has replaced retired champion Nico Rosberg at Mercedes, dropped him down the field after spinning behind the safety car.

Fifteen cars finished Sunay’s race, with neither McLaren making it to the flag.

Fernando Alonso, who “pushed like an animal” on Saturday to qualify 13th, had gone into the race aiming to capitalise on the mixed conditions to score his first points of the year, but his hopes were dashed by a driveshaft failure. Team-mate Stoffel Vandoorne was sidelined with fuel pressure problems.