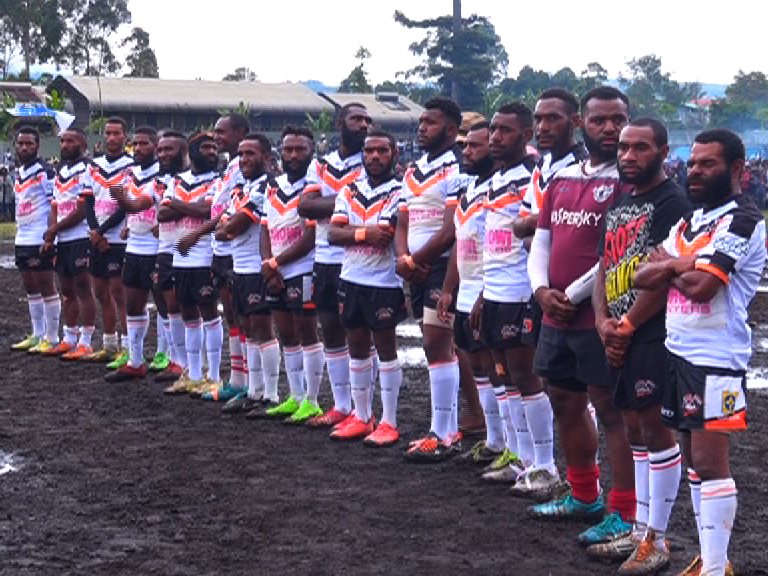 There were thrilling matches on Sunday afternoon. The B Grades of Warakum Bulls and Kum Crushers faced off in the grandfinal.

In the first half, the game was in favour of the Bulls, leading with 4 points, and Kum Crushers Nil.

Both sides played with with an impressive display of skills, having less errors and no penalty.

The combination of Warakum Bulls five-eight Slider Blue and Hooker Joe Epoe fed the forwards with excellent ball work, resulting in a lot of line breaks.

The Bulls gained more distance into the Crusher’s territory, and in the second half, the Bulls laid on another 10 points, thrashing Kum Crushers 14-nil.

League sponsor and founder since year 2000, William Duma, was pleased with the outcome and he named some now-famous products of the off-season league in Menzi Yere, Dion Aiye, Simon Young and Nickson Kolo.I

In the A-Grade match, Young Gunz and Kum Crushers went into the finals.

Both teams played a tough and tight game in the first half, but the Young Gunz on point with their fitness, scoring 4 points, and missing a conversion kick.

In the second half, Gunz got a penalty kick for a delayed tackle by the Crushers and scored 6 points to the Crushers 4.

Minutes before full time, the Crushers came in hard with their excellent game plan and ball pattern, winning the Grand Final 8 points to Gunz, losing by two points.