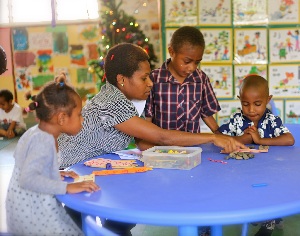 The Standards was produced (in collaboration with Volunteers Services Overseas) and launched by UOG’s School of Education and includes a DVD to assist teachers to use the Standards.

The six areas will set the foundation for the early childhood curriculum, which will be developed in the near future.

He said there is much work that needs to be done, but at least the foundations have been laid for early childhood education

The documents supports teacher to deliver the type of education offered in larger privately run schools such as those under the International Education Association (IEA), allowing the larger population in the country access to quality education as well.

While there is an interest to move Early Childhood Education from the Welfare Department to the National Department of Education, the gap in standards has now been bridged through this document.

UOG’s School of Education has been collaborating with organizations such as Volunteer Services Overseas (VSO), World Vision, UNICEF, Book Bilong Pikinini, and Save the Children on its Early Childhood Education Program.

The launching was done at the University of Goroka last Friday.