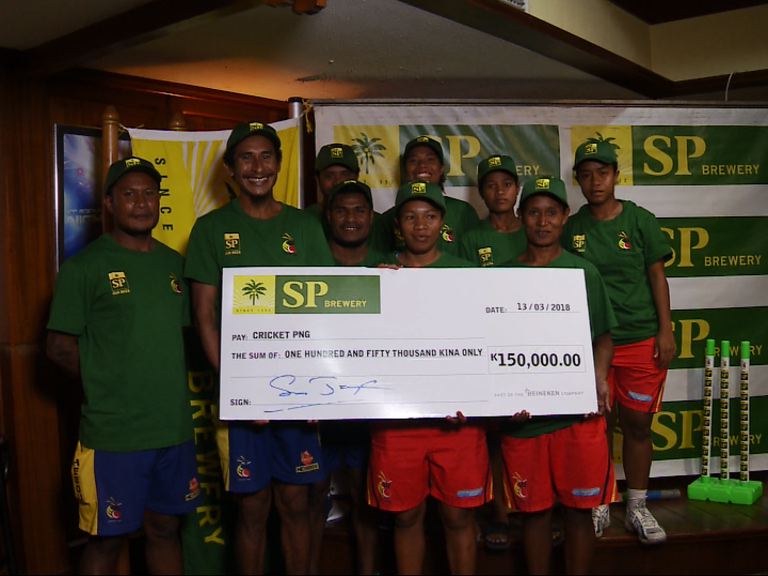 Cricket PNG was at the receiving end of a K150,000 sponsorship yesterday, thanks to the generosity of SP Brewery.

Upon receiving the sponsorship, Cricket PNG CEO, Greg Campbell, says this incentive will go a long way now that Cricket PNG looks to the next big event – the ICC Women’s Cricket World Cup Qualifier in the Netherlands.

SP Brewery has been supporting sports in the country over the years, and this year is no different.

The incentive will go towards supporting the men’s and women’s national teams in their high performance program.

“We announce our ongoing sponsorship to cricket in Papua New Guinea which is all about making it better and helping our teams – the Barramundis and the Lewas,” said SP Brewery Managing Director Stan Joyce.

The Director went on to thank the national cricketers for continuously promoting Papua New Guinea and good sportsmanship, not only in the country but overseas as well.

Meanwhile, in his address, CPNG CEO Greg Campbell was pleased with SP’s continuous support, adding that it makes a lot of difference for the cricketers.

“I’d like to thank Stan (Joyce) and his team here for once again sponsoring cricket PNG. We are very lucky to have such sponsors,” said Campbell.

“This sponsorship makes a lot of difference for our men (Barramundis) and our women (Lewas) and where we are taking cricket. It also gives us that one percent in sport extra and makes a difference to our team,” Joyce added.

Campbell further stated, “There are lots of sponsors but Stan ( Joyce) and his group are giving this money, not to do what we like (with it), we have to report back as it gives us that one percent difference to our teams to have an advantage where they are.”

With the Barramundis still engaged in their World Cup Qualifier fixtures in Zimbabwe, some of the National Women’s Team members, the CPL PNG Lewas, were present to witness the cheque presentation.

The SP sponsorship comes as the Lewas head into final preparations leading up to the ICC Women’s Cricket World Cup Qualifiers in the Netherlands later this year.

With such continuous support, the sport of cricket in the country will continue to grow from strength to strength, setting PNG apart from the rest in the region.