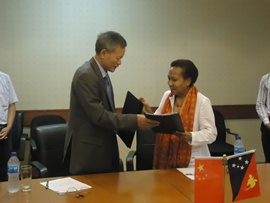 The Acting Secretary for Foreign Affairs and Trade, Ambassador Lucy Bogari, ISO yesterday signed and exchanged the agreement with His Excellency Mr. Qui Bohua, the Ambassador of the People’s Republic of China to Papua New Guinea.

Acting Secretary Bogari acknowledged the assistance and stated that the aid will be used to construct Phase II of the Mt Hagen Agriculture Technical Cooperation Project and purchase material for the Royal Constabulary of PNG.

The Acting Secretary cited that this is not the first time China has given such grant to PNG. Some of the past and on-going projects funded by the Government China to PNG includes the Port Moresby Sport Complex, Usino Yamagi Road, Goroka University (Phase II), Markham National High School, Kandep Wheat Project, the Eastern Highlands Mushroom Project, Wewak Sport Stadium, provision of medical doctors to the Department of Health, and the Papa Lealea Road among others.

Acting Secretary added that China was amongst the top five of Papua New Guinea’s development partners and that this assistance once again demonstrates the growing and significant level of bilateral relations existing between China and Papua New Guinea.

Public servants to be held accountable under new amendment