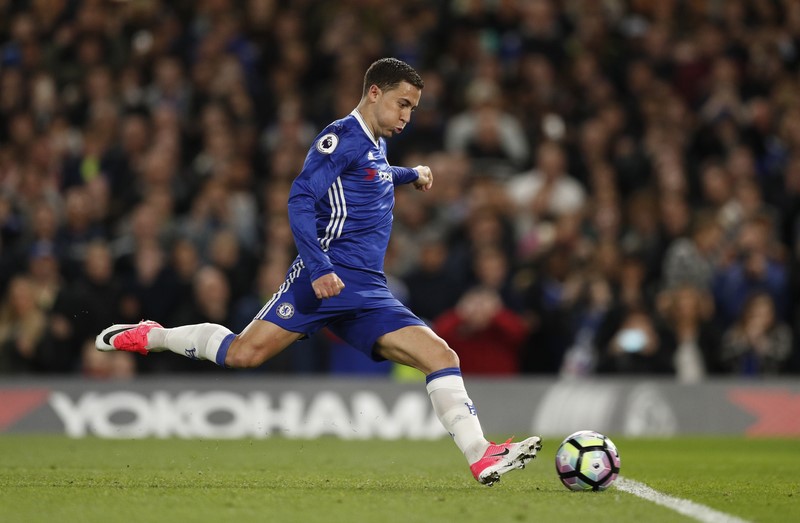 LONDON (Reuters) – Chelsea ticked off three more points in their Premier League title quest with a 2-1 victory over Manchester City on Wednesday but Tottenham Hotspur’s Houdini-like 3-1 win at Swansea means the race is far from over.

With Chelsea leading fourth-placed City at an edgy Stamford Bridge courtesy of Eden Hazard’s first-half brace and Tottenham, who kicked off 15 minutes earlier, trailing 1-0 at Swansea, a decisive swing in Chelsea’s favour loomed.

Chelsea manager Antonio Conte described his side’s gritty victory as a “big win” but said 90 points may be needed before they can start celebrating.

“The Tottenham result is important but the most important was our result,” Conte, whose side rebounded from Saturday’s first home defeat since September against Crystal Palace, told reporters after becoming the first manager to do a league double over City boss Pep Guardiola.

“The best thing for us to think is that Tottenham could win eight games so to win the title we need 18 points.”

Joshua King’s late leveller for Bournemouth in a 2-2 draw at Anfield all but knocked Liverpool out of the title equation as they are 12 points adrift of Chelsea having played a game more.

Goals by Philippe Coutinho and Divock Origi either side of halftime had put Liverpool ahead after Benik Afobe struck early for the visitors but once again Juergen Klopp’s side dropped points against the supposed also-rans.

With City, without a win in four games, a further two points back in fourth, Guardiola’s chief concern will be ensuring they keep above Arsenal and Manchester United in the scrap for qualification for next season’s Champions League.

Sergio Aguero’s equaliser on Wednesday, his 15th league goal of the season, looked to have given City the launchpad to increase Chelsea’s jitters but Fernandinho’s rash tackle on Pedro for a penalty which Hazard scored on the rebound meant Guardiola was outsmarted by Conte for the second time.

“We come here to Stamford Bridge and play the way we have, with huge personality. I’m a lucky guy to manage these guys,” Guardiola, an animated figure throughout the match, said.

With United only drawing with Everton on Tuesday, Arsenal moved up to fifth, four points behind City with a game in hand, after a 3-0 home victory over struggling West Ham United — a first win in four for Arsene Wenger’s side.

It was not just an important night at the top.

Hull City’s third win in four games — a 4-2 triumph over Middlesbrough with five goals coming before the break — saw Marco Silva’s team climb above Swansea and out of the bottom three.

Lazar Markovic, Oumar Niasse, Abel Hernandez and Harry Maguire were all on target to leave Boro looking favourites along with Sunderland to drop into the Championship next season.

Sunderland are 10 points adrift of the safety zone while Boro, without a win since December, are seven behind Hull.

Swansea, who led through Wayne Routledge’s early goal at the Liberty Stadium and seemed poised for a priceless victory, slipped back into the bottom three, two points below Hull.

Palace fell back to earth with a bump after their weekend heroics at Stamford Bridge, losing 3-1 at Southampton while West Ham’s fifth defeat on the spin keeps Slaven Bilic’s side too close to the relegation zone for comfort.