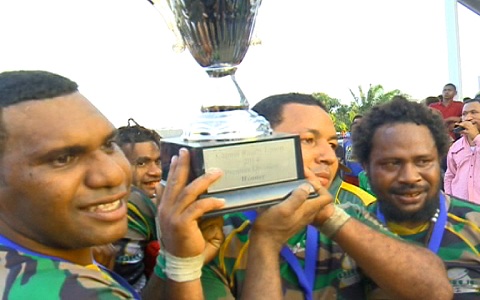 Fourteen clubs kicked off the 2014 season and 7 clubs have survived the short and competitive season, all vying for the 2014 CRU Premiership title.

With 14 clubs vying for a spot, 7 have made the cut into the finals.

It was the battle of the big buns when the brutish Harlequins took on Defence in the Men’s Premiership title.

With the aim of retaining the title for another year, harlequins opened up the score line in the opening minutes and put in a successful conversion off the boot by Roland Namo.

Defence wasn’t going to back down after they went down to Harlequins last year.

Rocky Ngaffin was successful on a conversion to put the points up on the board for Defence in the first half, before Josh Segati crossed the line to bring and lead the game 10-7.

The second half was no different to the first ad both teams, pulled out all tricks from the bag.

A successful conversion by Namo, brought the harlequins to lead in the game.

Defence was sure to make this final count after coming in second place last year, and was sure to break Harlequins dominance when Stewert Yamimbi sealed the final try for the season.

PNGDF Commander, Gilbert Toropo, was on hand to present both Grand Final teams with their medals.

With this year’s 2014 premiership under their belt, Defence will be sure to make another finals contention come next year’s season.