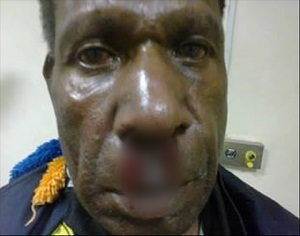 Calls have been made by former members of the Special Joint Task Force Team that had been established in 2012 to investigate the conduct of foreign businesses and influx of illegal immigrants. The team, however is no longer in existence but calls have been issued to revive the force.

This follows a public outcry on social media regarding an incident involving a G4S security guard who was bashed up by a Chinese national at 9 Mile, outside of Port Moresby, recently.

The team maintains that while foreigners are welcome to the country, they must respect nationals and operate within the laws of the country.

Following the assault on the G4S Security guard Anton Wany Kaimbu from the Enga Province at a shop at 9 mile, public anger has escalated on social media, particularly, the Voice of PNG Group.

Papua New Guinea’s posted comments on the Voice of PNG, asking why there has been an increase of foreign businesses operating in the country and why citizens, such as Anton Wany Kaimbu, are being mistreated as such.

This case has drawn the attention of the disbanded ‘Immigration Task Force’ who had been responsible for investigating illegal immigrants, work permits breached and human smuggling.  The task force was coordinated by John Bria with support from officers from multi-agencies that comprised of the police, immigration, and the National Intelligence Organisation.

In 2008, EMTV ran a series of reports on the arrest and deportation of illegal immigrants to their country of origin.

Through the special operation, a total of 40 illegal foreigners were arrested in Goroka for breaching visa conditions; with another 60 illegal immigrants nabbed in Lae, Madang, Wewak, Vanimo and Central Province in logging camps.

With the recent influx of foreign businesses and the recent assault of the G4S guard, there have been calls to re-engage Immigration Task Force Team (Rausim Alien).