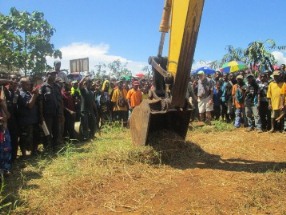 In the Madang Province, the Bundi station road will be opened by December this year.

A ground breaking ceremony was held at Banu in Madang’s Bundi Local Level Government over the weekend.

Member for Usino Bundi Anthon Yagama told the gathering that by December this year; vehicles should be travelling from Banu to Brahaman.

The road spans 40 kilometers and is to cost K11 million. K8 million from MRA and the balance from the MP’s District Support Improvement Program fund.

Mr Yagama said his immediate focus will be roads and education to ensure Usino-Bundi is at par with rest of the province.