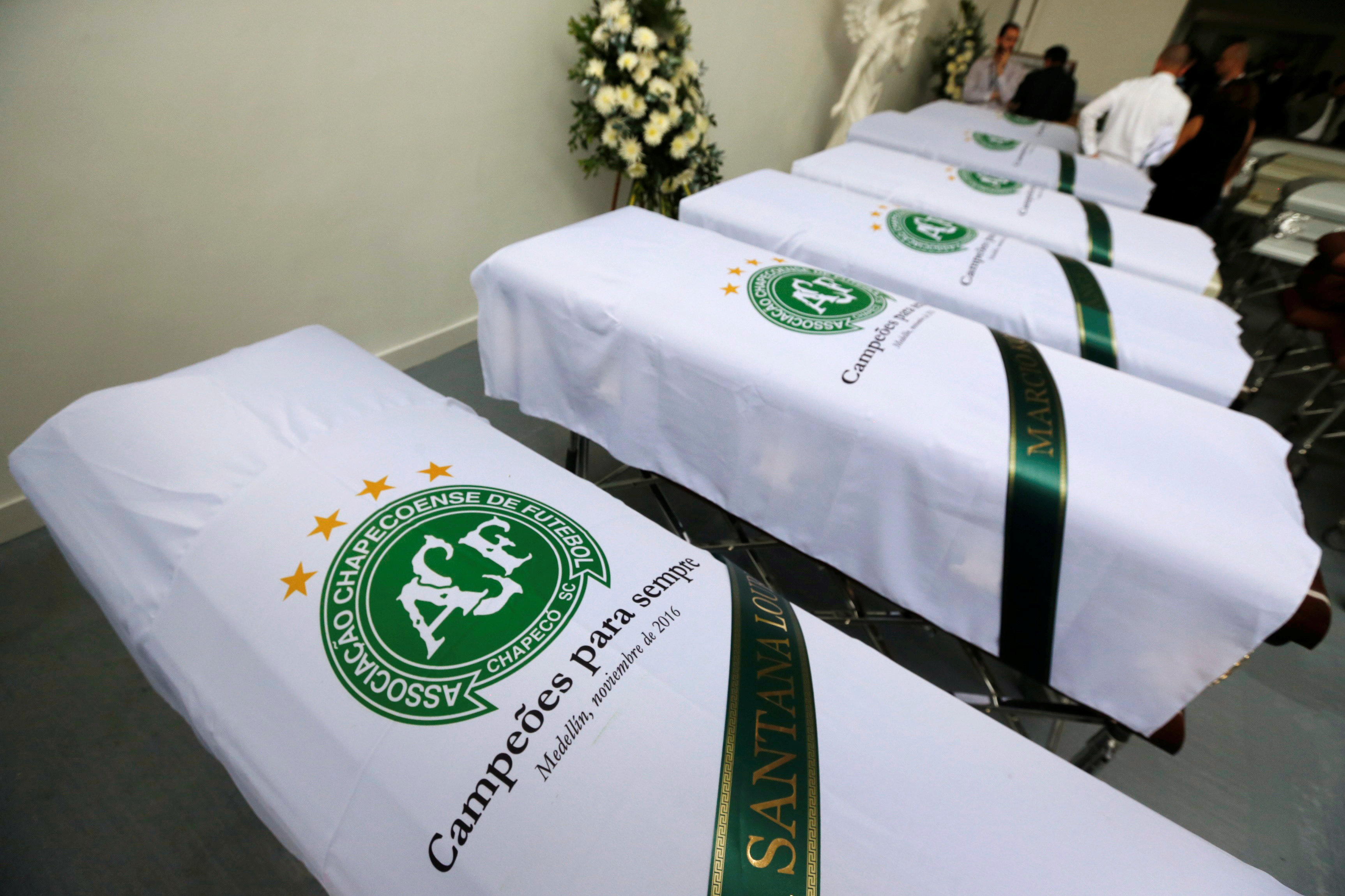 Image: Blankets bearing the crest of Brazilian soccer team Chapecoense are placed on coffins holding the remains of the victims who died in an accident of the plane that crashed into the Colombian jungle with the team’s players onboard, in Medellin, Colombia December 1, 2016. REUTERS/Jaime Saldarriaga

By Daniel Ramos and Fredy Builes

LA PAZ/MEDELLIN, Colombia (Reuters) – Bolivian authorities on Thursday suspended the license of a tiny charter airline whose plane crashed in Colombia this week after apparently running out of fuel, killing 71 people and wiping out a Brazilian football team on its way to a regional cup final.

Monday night’s disaster sent shock waves across the global football community and plunged Brazil, Latin America’s largest nation, into mourning. The small Chapecoense team was travelling on a charter flight operated by airline LAMIA Bolivia to the biggest game in its history, the final of the Copa Sudamericana.

Investigators combing the crash site on a wooded hillside outside of Medellin found no traces of fuel in the wreckage of the BAe 146 made by Britain’s BAE Systems Plc , signalling that the crash may have resulted from lack of fuel.

“In this case, sadly, the aircraft did not have enough fuel to meet the regulations for contingency,” said Freddy Bonilla, secretary of airline security at Colombia’s aviation authority.

Bolivian authorities said they were suspending LAMIA’s operating license and replacing the management of its aviation authority to ensure a transparent investigation. It said that neither decision implied wrongdoing.

Medellin air traffic controllers asked the LAMIA pilot to wait while another flight made an emergency landing. Details on the length of the wait and problems with the other flight were not immediately available.

Air traffic controller Yaneth Molina, who received the distress call, said in a letter written to colleagues that she had received death threats following the crash.

“I did all that was humanly possible and technically necessary to preserve the lives of the passengers, but unfortunately my efforts weren’t enough,” Molina wrote in her letter, which was later released to the press.

A crackling recording obtained by Colombian media of Bolivian pilot Miguel Quiroga’s final words showed he told the control tower at Medellin’s airport that the plane was “in total failure, total electrical failure, without fuel.”

He requested urgent permission to land, and then the audio went silent.

LAMIA Chief Executive Officer Gustavo Vargas on Wednesday said the plane had been correctly inspected before departure and should have had enough fuel for about 4-1/2 hours. In such situations, it is at the pilot’s discretion whether to refuel, Vargas said.

Only 0.5 percent of accidents on record were blamed on low fuel, according to the U.S.-based Flight Safety Foundation.

In the football club’s small farming hometown of Chapeco in southern Brazil, workers on Thursday erected temporary structures in the stadium to shelter the coffins of 51 victims – players, staff and journalists – expected to arrive back on Friday for an open-air wake.

Some 100,000 fans, about half the city’s population, were expected to attend, as were Brazilian President Michel Temer and Gianni Infantino, president of world football governing body FIFA.

On Wednesday night, when the Copa Sudamericana final had been scheduled, tens of thousands of fans assembled in tribute at Chapecoense’s arena and the stadium in Medellin of rival team Atletico Nacional.

“We Brazilians will never forget the way in which Colombians have felt as their own the pain of this terrible disaster that ended the historic dream of Chapecoense,” Foreign Minister Jose Serra told the crowds in Medellin.

Fox Sports Brasil, which lost six of its journalists in the crash, broadcast 90 minutes of a black screen in the time slot of Wednesday’s game.

A spokesman for Britain’s Air Accidents Investigation Branch said an inspector for the agency and Colombian officials would transport the aircraft’s black boxes back to the United Kingdom, where the information will be downloaded.

Only six on board the flight survived: three Chapecoense team members, a journalist and two Bolivian crew members.

Some have wondered why Chapecoense used the charter company instead of a commercial airline. Club Vice President Luiz Antonio Palaoro said LAMIA had a track record of transporting football teams around South America, and it had used the airline before.

“We are dealing with the humanitarian aspect of the families and the victims,” Palaoro told reporters in Chapeco. “After that, we are going to have to think about restructuring the team and also the appropriate legal measures.”

Two of the Bolivian flight crew, Ximena Suarez and Erwin Tumiri, were bruised but not in critical condition, while journalist Rafael Valmorbida was treated in intensive care for multiple rib fractures that partly collapsed a lung.