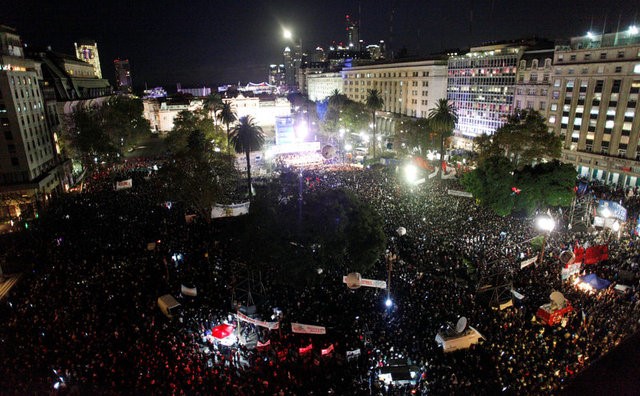 BUENOS AIRES (Reuters) – Tens of thousands of Argentines protested on Wednesday against a Supreme Court ruling that could decrease jail time for those convicted of human rights abuses during the country’s 1976 – 1983 military dictatorship that killed as many as 30,000 people.

The ruling was widely criticized, including by President Mauricio Macri, and Congress passed a law earlier on Wednesday to block future reductions of sentences for killings, torture, kidnappings and other human rights violations during the so-called Dirty War.

The Supreme Court’s May 3 decision ruled in favour of Luis Muiña, who was sentenced in 2011 to 13 years in jail for kidnapping and torturing five people during the dictatorship.

The court said a law known locally as “two for one” that allows every day spent in jail before a final sentence to count for two days when more than two years have been served, could apply for human rights cases.

“I would like to congratulate the Congress for the speed at which it resolved the legal vacuum left by this unfortunate 2-for-1 law,” Macri said in a press conference earlier on Wednesday. “I am against any tool that is in favour of impunity, more so when this tool is applied to crimes against humanity.”