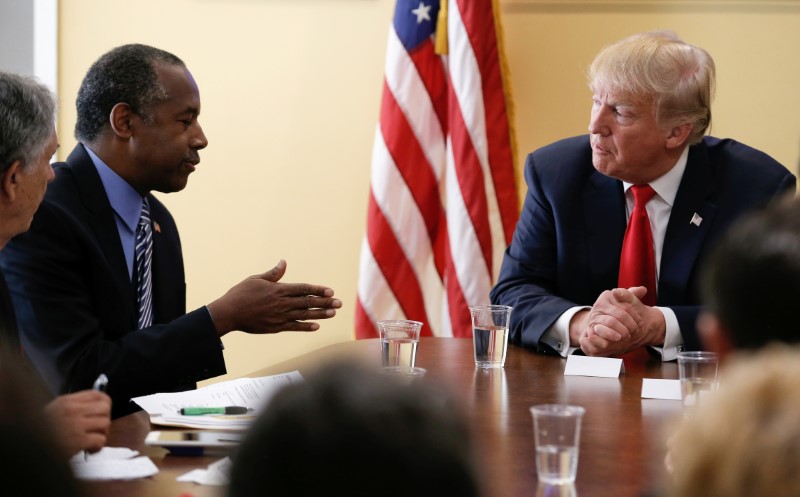 By Doina Chiacu and Diane Bartz

WASHINGTON (Reuters) – Retired neurosurgeon Ben Carson, a rival-turned-supporter of Donald Trump, overcame his stated qualms about a lack of government experience on Monday to accept the president-elect’s nomination to lead the Department of Housing and Urban Development.

Carson, a popular writer and speaker in conservative circles, has been a close adviser to Trump since he dropped out of the 2016 Republican presidential primary contest and he is a vice chairman of Trump’s transition team.

Trump discussed the job with Carson before the Thanksgiving Day holiday last month, although – despite his own presidential run – Carson had previously indicated reluctance to take a position in the incoming administration because of his lack of experience in federal government.

Picking up that theme, House of Representatives Democratic leader Nancy Pelosi said on Monday, “Dr. Ben Carson is a disconcerting and disturbingly unqualified choice to lead a department as complex and consequential as Housing and Urban Development.”

Trump, a real estate magnate who also has no government experience and has never held public office, expressed confidence Carson could do the job, saying in a statement that he “has a brilliant mind and is passionate about strengthening communities and families within those communities.”

Carson, 65, is the first African-American picked for a Cabinet spot by Trump, who takes office on Jan. 20 and has been gradually filling out his administration since beating Democrat Hillary Clinton in the Nov. 8 presidential election.

Carson said he was honoured to accept the post, which requires confirmation by the U.S. Senate. “I feel that I can make a significant contribution particularly by strengthening communities that are most in need,” he said in the statement.

Republicans control the Senate and Senator Lindsey Graham, who has been a sometimes strong critic of Trump, praised Carson in a statement, saying “I’m sure he will be an agent of change in a department that could stand some change.”

Carson, a respected neurosurgeon at Johns Hopkins Hospital in Baltimore, had been considered for U.S. surgeon general and head of Health and Human Services Department.

His business manager, Armstrong Williams, said last month that Carson had decided not to serve in Trump’s administration because “his life has not prepared him to be a Cabinet secretary.” But Carson said after meeting with Trump he believed he could make a contribution.

Like many of the initial field of 17 White House hopefuls who vied for the Republican Party’s 2016 presidential nomination, Carson was a frequent target of Trump attacks during the campaign. But he became one of his most high-profile African-American supporters after Trump secured the nomination.

Carson enjoyed a brief surge early in the presidential campaign that took him to the top of the Republican polls in late 2015. But Trump went after him, questioning his mental stability because of childhood incidents in which Carson said he attacked his mother with a hammer and tried to stab another boy.

Carson’s campaign sputtered after that and he dropped out of the race in March.

He would take over a department whose mission has been to help middle- and low-income people find housing by offering a combination of public housing, rent subsidies and mortgage assistance.

The agency oversees mortgage lending and is also responsible for enforcing laws intended to prevent discrimination against those attempting to rent or buy homes.

Carson has been critical of HUD efforts under the administration of Democratic President Barack Obama to compel local governments to actively seek to end discrimination, instead of just responding to instances of racial discrimination.

In a column he wrote in 2015 for the Washington Times, Carson called the program a “mandated social-engineering scheme.”

If confirmed to the post, he could seek to end the Obama program.

Trump is still considering various candidates to fill the post of U.S. secretary of state.

Former Vice President Al Gore, a Democrat and a longtime advocate for strong steps to tackle climate change, was scheduled to meet on Monday with Trump’s daughter Ivanka.

In the past, Trump has dismissed the idea of man-made climate change as a hoax and he said during the campaign that he would seek to get the United States out of the Paris Agreement to reduce global emissions of fossil fuels. But last month he told the New York Times he had an open mind on this.

Meanwhile, Green Party presidential nominee Jill Stein filed suit in federal court in Pennsylvania on Monday in an attempt to force a statewide recount of voting there, adding to recounts in Michigan and Wisconsin. Even if the recounts were to proceed in all three states, there is almost no chance that they would overturn Trump’s victory in last month’s election.