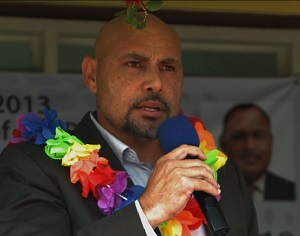 Minister for National Planning, Charles Abel has defended the 2015 national budget, refuting the Opposition’s claims that it is a “hoax budget”.

Minister Abel maintained that the national budget was the combined effort of members of the government and was the result of much planning.

He added that it is the first time the government’s efforts are finally tangible. Following the Opposition’s radical reply to the 2015 national budget and the 2014 supplementary budget, Minister Abel referred back to the Alotau Accord where the current government and its coalition partners set an ambitious plan to rebuild the country.

“If there’s one thing this government is guilty of, its trying to get things done.” Mr Abel said.

Minister Abel said that in reality, things are starting to happen. He said mistakes were inevitable as the government was trying to be proactive.

Minister Abel said that in reality, things are starting to happen. He said mistakes were inevitable as the government is trying to be proactive. He said the 2014 supplementary budget should not be seen as a bad thing, rather an example of the government trying to be responsible.

Fighters During Crisis Not Recognised