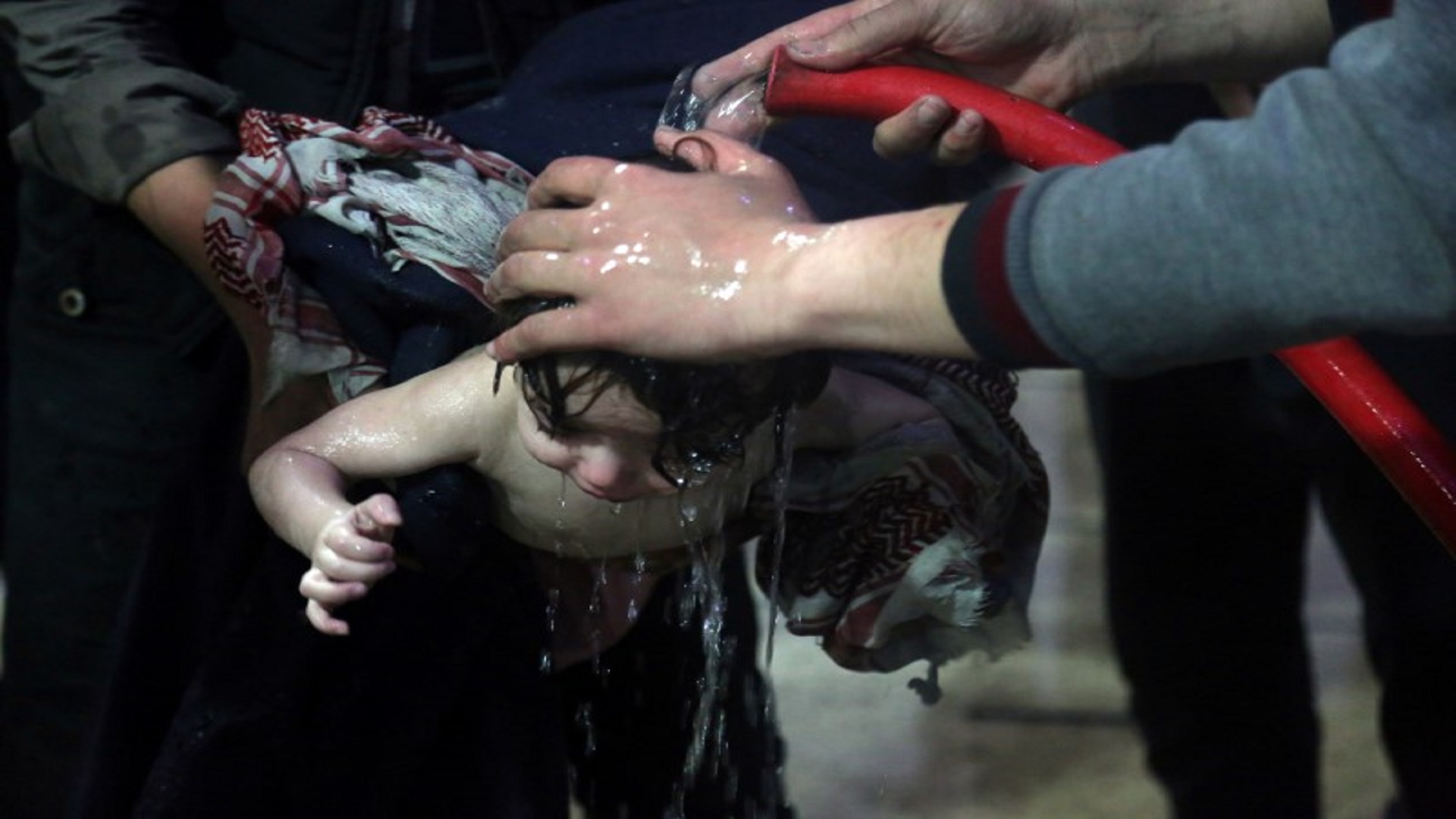 Image: A child is treated in a hospital in Douma, eastern Ghouta in Syria, after what a Syria medical relief group claims was a suspected chemical attack April, 7, 2018. White Helmets/Handout via REUTERS

By Michelle Nichols and Ellen Francis

UNITED NATIONS/BEIRUT (Reuters) – Russia and the United States tangled on Tuesday at the United Nations over the use of chemical weapons in Syria as Washington and its allies considered whether to strike at President Bashar al-Assad’s forces over a suspected poison gas attack last weekend.

Moscow and Washington halted attempts by each other in the U.N. Security Council to set up international investigations into chemical weapons attacks in Syria, which is in the throes of a seven-year-old civil war.

U.S. President Donald Trump and Western allies are discussing possible military action to punish Assad for a suspected poison gas attack on Saturday on a rebel-held town that long had held out against government forces.

Trump on Tuesday cancelled a planned trip to Latin America later this week to focus instead on responding to the Syria incident, the White House said. Trump had on Monday warned of a quick, forceful response once responsibility for the Syria attack was established.

Pan-European air traffic control agency Eurocontrol warned airlines to exercise caution in the eastern Mediterranean due to the possible launch of air strikes into Syria in next 72 hours.

On the diplomatic front, the United Nations Security Council failed to approve three draft resolutions on chemical weapons attacks in Syria. Russia vetoed a U.S. text, while two Russian-drafted resolutions failed to get a minimum nine votes to pass.

Moscow opposes any Western strike on its close ally Assad and has vetoed Security Council action on Syria 12 times since the conflict started.

U.S. Ambassador to the United Nations Nikki Haley told the Security Council that adopting the U.S.-drafted resolution was the least that member nations could do.

“History will record that, on this day, Russia chose protecting a monster over the lives of the Syrian people,” Haley said, referring to Assad.

At least 60 people were killed and more than 1,000 injured in Saturday’s suspected chemical weapons attack on the town of Douma, according to a Syrian relief group.

Doctors and witnesses have said victims showed symptoms of poisoning, possibly by a nerve agent, and reported the smell of chlorine gas.

Russian U.N. Ambassador Vassily Nebenzia said Washington’s decision to put forward its resolution could be a prelude to a Western strike on Syria.

“I would once again ask you, once again beseech you, to refrain from the plans that you’re currently developing for Syria,” he said after the council failed to approve a third draft resolution on chemical weapons attacks in Syria.

France and Britain discussed with the Trump administration how to respond to the Douma attack. Both stressed that the culprit still needed to be confirmed.

The Douma incident has thrust Syria’s conflict back to the forefront of the international stage, pitting Washington and Moscow against each other once again.

Trump said that he would make a decision about how to respond within a few days, adding that the United States had “a lot of options militarily” on Syria.

Assad’s government and Russia have said there was no evidence a gas attack had taken place and that the claim was bogus.

Any U.S. strike is likely to involve naval assets, given the risk to aircraft from Russian and Syrian air defence systems. A U.S. Navy guided-missile destroyer, the USS Donald Cook, is in the Mediterranean.

A key issue being considered by U.S. defence and intelligence agencies and war planners is the effectiveness of Syrian air defences and the extent to which Russia is helping to organise, and ultimately, direct Syrian air defence operations, according to two U.S. government sources.

Last year, the United States launched strikes from two Navy destroyers against a Syrian air base.

U.S. military action similar to last year’s would likely not cause a shift in the direction of the war that has gone Assad’s way since 2015 with massive aid from Iran and Russia.

There was little expectation that members of Congress would object if Trump launched an attack on Syria, despite some calls for lawmakers to exert their power to authorize military action. Most members of Congress – Democrats as well as his fellow Republicans – praised Trump after the strike last year.

The Hague-based Organisation for the Prohibition of Chemical Weapons (OPCW) said Syria had been asked to make the necessary arrangements for the deployment of an investigation team.

“The team is preparing to deploy to Syria shortly,” it said in a statement.

The mission will aim to determine whether banned munitions were used but will not assign blame.

The Assad government and Russia both urged the OPCW to investigate the allegations of chemical weapons use in Douma, a move by the two countries that was apparently aimed at averting any U.S.-led action.

“Syria is keen on cooperating with the OPCW to uncover the truth behind the allegations that some Western sides have been advertising to justify their aggressive intentions,” Syria’s state news agency SANA said.

A European source said European governments were waiting for the OPCW to carry out its investigation and for more solid forensic evidence from the attack to emerge. Any plan by Washington and its allies to take military action was likely to be on hold until then, the source said.

In Syria, thousands of militants and their families arrived in rebel-held parts of the country’s northwest after surrendering Douma to government forces.

Their evacuation restored Assad’s control over eastern Ghouta, formerly the biggest rebel bastion near Damascus, and gave him his biggest battlefield victory since 2016, when he took back Aleppo.

Aggravating the volatile situation in the region, Iran – Assad’s other main ally – threatened to respond to an air strike on a Syrian military base on Monday that Tehran, Damascus and Moscow have blamed on Israel.

Russian Deputy Foreign Minister Mikhail Bogdanov, meanwhile, said there was no threat of the situation in Syria resulting in a military clash between Russia and the United States. TASS news agency quoted him as saying he believed common sense would prevail.

A Russian warplane flew over a French warship at low altitude in the eastern Mediterranean this weekend, a deliberate breach of international regulations, a French naval source said on Tuesday.

The weekly magazine Le Point said the Russian plane had flown over the frigate Aquitaine and was fully armed. The Aquitaine is equipped with 16 cruise missiles and 16 surface-to-air missiles. It is currently operating off Lebanon alongside U.S. ships as part of France’s military contingent fighting Islamic State militants in Syria and Iraq.

Despite the international revulsion over chemical weapons attacks, the death toll from such incidents in Syria is only a fraction of the hundreds of thousands of combatants and civilians killed since the war began in 2011.

Nichole Joannes: Risks and Challenges Are for the Overcomers