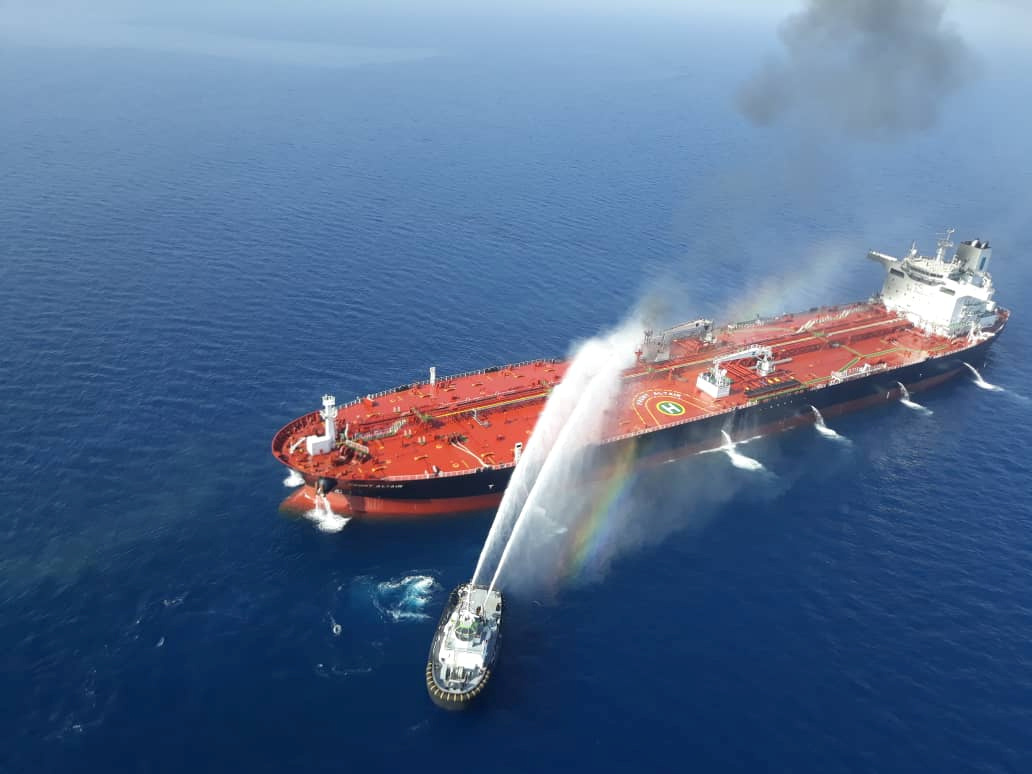 An Iranian navy boat tries to stop the fire of an oil tanker after it was attacked in the Gulf of Oman, June 13, 2019. Tasnim News Agency/Handout via REUTERS

By Lisa Barrington and Lesley Wroughton

DUBAI/WASHINGTON (Reuters) – The United States blamed Iran for attacks on two oil tankers in the Gulf of Oman on Thursday that drove up oil prices and raised concerns about a new U.S.-Iranian confrontation, but Tehran bluntly denied the allegation.

It was not immediately clear what befell the Norwegian-owned Front Altair or the Japanese-owned Kokuka Courageous, which both experienced explosions, forcing crews to abandon ship and leave the vessels adrift in waters between Gulf Arab states and Iran.

One source said the blast on the Front Altair, which caught fire and sent a huge plume of smoke into the air, may have been caused by a magnetic mine.

The firm that chartered the Kokuka Courageous tanker said it was hit by a suspected torpedo, but a person with knowledge of the matter said torpedoes were not used.

A U.S. official, speaking on condition of anonymity, told Reuters that the United States had video showing Iran’s military removing what Washington believes was an unexploded limpet mine from the side of the Japanese tanker.

Crude oil prices spiked more than 4% after the attacks near the entrance to the Strait of Hormuz, a crucial shipping artery for Saudi Arabia and other Gulf energy producers. Prices later settled about 2% higher. [O/R] Brent crude was down by 0.4% at $61.06 a barrel in early Asia trading.

The United States, which has accused Iran or its proxies of carrying out a May 12 attack on four tankers off the United Arab Emirates’ coast as well as May 14 drone strikes on two Saudi oil-pumping stations, squarely blamed Iran for Thursday’s attacks.

“It is the assessment of the United States government that the Islamic Republic of Iran is responsible for the attacks that occurred in the Gulf of Oman today,” U.S. Secretary of State Mike Pompeo https://www.reuters.com/article/mideast-tanker-usa/update-1-u-s-top-diplomat-says-u-s-believes-iran-behind-attacks-on-oman-gulf-tankers-idUSL2N23K18H told reporters.

Pompeo did not provide explicit evidence to back up the U.S. assertion.

“This assessment is based on intelligence, the weapons used, the level of expertise needed to execute the operation, recent similar Iranian attacks on shipping, and the fact that no proxy group operating in the area has the resources and proficiency to act with such a high degree of sophistication,” Pompeo said.

Iran “categorically rejects the U.S. unfounded claim with regard to 13 June oil tanker incidents and condemns it in the strongest possible terms,” the Iranian mission to the United Nations said in a statement on Thursday evening.

U.S. and European security officials as well as regional analysts cautioned against jumping to conclusions about who carried out the attacks, leaving open the possibility that Iranian proxies, or someone else entirely, might have been responsible.

In London, British Foreign Secretary Jeremy Hunt said the UK was taking the matter “extremely seriously” and that if Iran was involved, “it is a deeply unwise escalation which poses a real danger to the prospects of peace and stability in the region.”

Tensions between Iran and the United States have risen since U.S. President Donald Trump pulled out of a deal last year between Iran and global powers that aimed to curb Tehran’s nuclear ambitions in exchange for sanctions relief.

Iran has repeatedly warned it would block the Strait of Hormuz if it cannot sell its oil because of U.S. sanctions.

Tensions have increased further since Trump acted at the beginning of May to force Iran’s oil customers to slash their imports to zero or face draconian U.S. financial sanctions. Iran’s oil exports have dropped to around 400,000 barrels per day in May from 2.5 million bpd in April last year.

Also in May, the Trump administration said it would send more troops to the Middle East, citing what it saw as a threat of potential attack by Iran.

Iranian Foreign Minister Mohammad Javad Zarif described the tanker explosions as “suspicious” https://www.reuters.com/article/mideast-tanker-iran-zarif/irans-zarif-calls-oil-tanker-incidents-suspicious-wants-regional-talks-idUSD5N20801L on Twitter and called for regional dialogue. Tehran has denied responsibility for the May 12 attacks.

The crews of both ships struck on Thursday were picked up safely. The Bahrain-based U.S. Navy Fifth Fleet said it had assisted the two tankers after receiving distress calls.

U.N. Secretary-General Antonio Guterres told a meeting of the Security Council on cooperation between the United Nations and the League of Arab States that the world could not afford “a major confrontation in the Gulf region”.

The Security Council discussed the attacks behind closed doors on Thursday at the request of the United States.

Kuwait’s U.N. ambassador, Mansour Al-Otaibi, president of the council for June, said after the meeting that all 15 council members had condemned the attacks.

When asked if the United States had shown any evidence to support its accusation that Iran was responsible, Al-Otaibi told reporters: “We didn’t discuss any evidence.”

For a graphic on Position of evacuated tankers in Gulf of Oman, see – https://tmsnrt.rs/2X6nIQF

Both Iran and the United States have said they want to avoid war.

“Iran will never initiate a war but will give a crushing response to any aggression,” Iranian President Hassan Rouhani said on Wednesday.

U.S. Central Command said in a statement on Thursday evening that “we have no interest in engaging in a new conflict in the Middle East. We will defend our interests, but a war with Iran is not in our strategic interest, nor in the best interest of the international community.”

Pompeo said U.S. policy remained making economic and diplomatic efforts to bring Iran back to negotiations on a broader deal.

The Iranian U.N. mission’s statement said: “It is ironic that the U.S. who unlawfully withdrew from the Joint Comprehensive Plan of Action now calls Iran to come back to negotiations and diplomacy,” using the formal name of the 2015 nuclear accord.

In abandoning the deal, Trump made clear he wanted Iran to curb not merely its nuclear work but its development of missiles and support for proxy forces in Iraq, Syria, Lebanon and Yemen.

Some regional analysts said they thought the attacks were likely to have been carried out by Iran and described them as a way for Tehran to try to acquire negotiating leverage and perhaps increase global pressure for U.S.-Iran talks.

“There is always the possibility that somebody is trying to blame the Iranians,” said Jon Alterman of Washington’s Center for Strategic and International Studies.

“But there is the greater likelihood that this represents an effort to bolster Iranian diplomacy by creating a perceived international urgency to have the United States and Iran talk,” Alterman said.

Japanese Prime Minister Shinzo Abe was visiting Tehran when Thursday’s attacks occurred, carrying a message for Iran from Trump. Abe, whose country was a big importer of Iranian oil until Trump ratcheted up sanctions, urged all sides not to let tensions increase.

Iran said it would not respond to Trump’s overture, the substance of which was not made public.

PMIZ: What are the benefits?