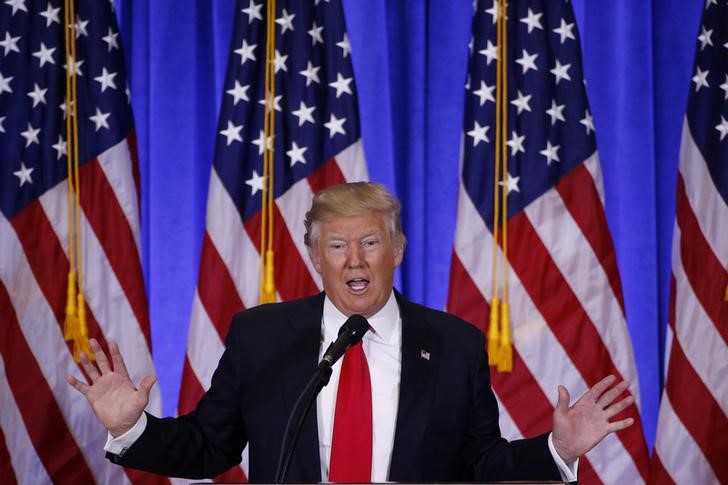 WASHINGTON (Reuters) – U.S. President-elect Donald Trump aims to replace Obamacare with a plan that would envisage “insurance for everybody,” he said in an interview with the Washington Post published on Sunday night.

Trump did not give the newspaper specifics about his proposals to replace Democratic President Barack Obama’s signature health insurance law, but said the plan was nearly finished and he was ready to unveil it alongside the leaders of the Republican-controlled Congress. The Republican president-elect takes office on Friday.

“It’s very much formulated down to the final strokes. We haven’t put it in quite yet but we’re going to be doing it soon,” Trump told the Post, adding he was waiting for his nominee for health and human services secretary, Tom Price, to be confirmed.

The plan, he said, would include “lower numbers, much lower deductibles,” without elaborating.

“We’re going to have insurance for everybody,” Trump said. “There was a philosophy in some circles that if you can’t pay for it, you don’t get it. That’s not going to happen with us.”

Trump was also quoted as saying in the interview that he would target pharmaceutical companies over drug pricing and insist they negotiate directly with the Medicare and Medicaid government health plans for the elderly and poor.

U.S. House Republicans won passage on Friday of a measure starting the process of dismantling the Affordable Care Act, popularly known as Obamacare, despite concerns about not having a ready replacement and the potential financial cost of repealing the law.

With the vote, Republicans began delivering on their promise to end Obamacare, also a campaign pledge of Trump, who has called the program a “disaster.”

The law, which expanded health coverage to some 20 million people, has been plagued by increases in insurance premiums and deductibles and by some large insurers leaving the system.

Republicans have called Obamacare federal government overreach and have sought to undermine it in Congress and the courts since it was passed by Democratic majorities in the House and Senate in 2010.

Democrats say Obamacare has allowed growing numbers of Americans to get medical insurance and helped slow the rise in healthcare spending.

(Writing by Mary Milliken; Editing by Will Dunham and Peter Cooney)

Gene Cernan, last astronaut to walk on moon, dies at 82