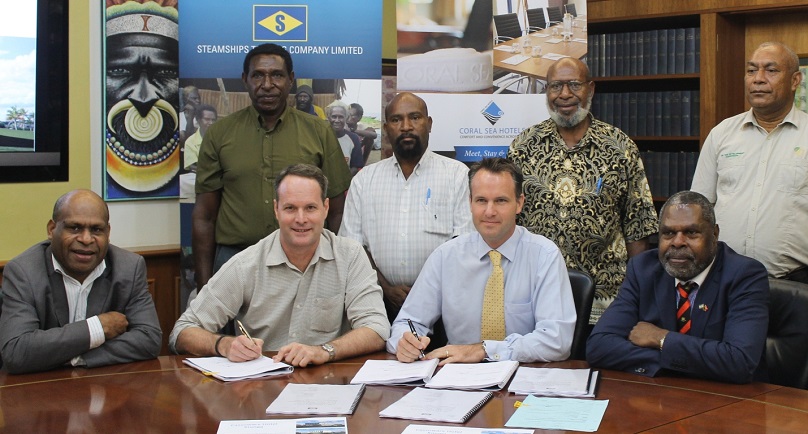 Steamships will be constructing a hotel in Kiunga, Western Province. This is in partnership with the Ok Tedi Development Foundation (OTDF). Construction is expected to begin next year.

The important signing ceremony, which will see the construction of the proposed Cassowary Hotel in Kiunga, Western Province, was done today in Port Moresby.

Steamships, through its businesses Pacific Palms Property and Coral Sea Hotels, will construct the hotel.

Pacific Palms Property, responsible for developments such as Waigani Central, Grand Papua and the Harbour-side development, will be managing the construction of the hotel on behalf of OTDF. It is expected to start next year, with completion expected in mid-2016. Coral Sea Hotels will lease and operate the hotel.

The Cassowary Hotel will have 45 rooms, together with a meeting room, restaurant, bar and shop conveniently located on the outskirts of Kiunga.

Ok Tedi Development Foundation is the legal entity that manages community development benefits from Ok Tedi mine operations on behalf of the 100,000 residents living in the 156 villages throughout Western Province.

Western Province Governor Ati Wobiro commended the OTDF and Steamships for the initiative, saying it was a partnership the province was looking to get into with the private sector to develop the province.