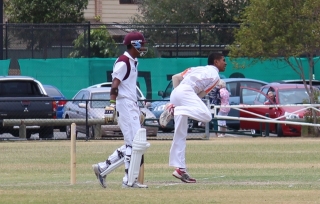 Also in this episode:

Sese Bau played an important cameo innings of 27 when the game was in the balance which saw the Bullsharks pass Runaway Bays 155 with 3 overs to spare. Charles Amini’s leg spin proved to be a handful for the Bullsharks batsman as they found runs hard to come by.

Young Charles was unable to take revenge on his elder brother who had dismissed him during the first days play.  Charles bowled well to finish with 2/49 off his 24 overs and was unlucky not to have claimed several more wickets as dropped chances was the story of the day for Runaway Bay.

Norman Vanua also bowled well without luck as he returned with economic figures of 0/23 off his 15 overs.

Set a mammoth 295 for victory, Broadbeach made light work of the massive total passing the score after 68 overs. PNG’s Assad Vala (9) & Jason Kila (8) both missed out with the bat as a result of some unlucky umpiring decisions. Their two English county imports were the stars as they helped Broadbeach to chase down the target and stay at the top of the ladder.

Palm Beach (Tony Ura, Jack Vare) held off Alberton CC to win by 25 runs as bad light came to play on day 2. Palm Beach has also won both of their opening games of the season and is third behind Broadbeach & Burleigh.

Caption: It was the battle between the Amini brothers (Chris & Charles) with Chris coming out on top.