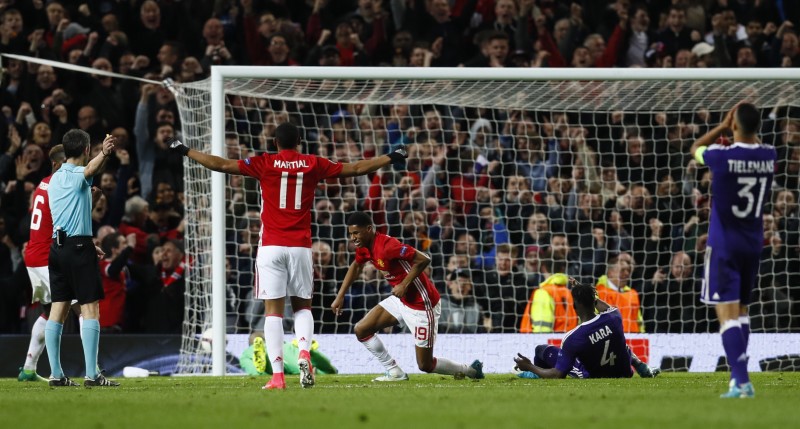 MANCHESTER, England (Reuters) – Manchester United needed an extra-time winner from Marcus Rashford to defeat Anderlecht 2-1 at Old Trafford on Thursday and move into the last four of the Europa League with a 3-2 aggregate victory.

While the result keeps open a possible path to next season’s Champions League for Jose Mourinho’s side, it came at a high price with defender Marcos Rojo and forward Zlatan Ibrahimovic both suffering possibly serious knee injuries.

United took the lead in the 10th minute through Henrikh Mkhitaryan, but Sofiane Hanni brought the Belgian side back level in the 32nd.

After Ibrahimovic wasted two great chances in the final stages of normal time, the contest went into extra time and Rashford settled the tie with a fine finish early in the second period.

It was not the comfortable passage into the semi-finals that United might have expected with Anderlecht showing no shortage of guts and enterprising football, but it was a deserved victory for the English side.

United, buoyed by their Premier League win over Chelsea on Sunday, started confidently and grabbed the early advantage.

Paul Pogba played a pinpoint 40-metre pass along the ground to Rashford who, at the second attempt, found Mkhitaryan on the edge of the box and the Armenian midfielder drilled home his fifth goal in this season’s Europa League.

There was almost a swagger about United’s approach and they twice came close to instantly doubling their advantage with Pogba seeing a firm header tipped over by Anderlecht keeper Martinez Ruben who moments later excelled again as he pushed a curling Jesse Lingard shot wide.

But the 33-times Belgian champions, were not willing to be swept away and after a defensive mix-up Frank Acheampong outpaced Eric Bailly and fired dangerously into the side-netting.

After Rojo was taken off on a stretcher with a knee injury, being replaced by Dutch international Daley Blind, United appeared to lose focus.

The Belgians struck back when Youri Tielemans hammered a powerful long-range shot against the bar, Lukasz Teodorczyk got the loose ball stuck under his feet but was able to nudge it into the path of Algerian Sofiane Hanni who drove in the equaliser.

Rashford was again the main threat after the break, shooting off target from a promising position. He then robbed Dennis Appiah, burst goalward and rounded Ruben but was forced too wide for an effective shot.

United certainly should have been back in the lead when Marouane Fellaini headed down a cross to Ibrahimovic but the normally clinical forward shot straight at Ruben from point-blank range.

Ibrahimovic then wasted another good opportunity, screwing his shot wide after being found in the box by Michael Carrick and a bad night got much worse for the Swede, who fell badly in the final action of normal time and picked up a knee injury.

United were dominant and Pogba had an effort ruled out when Fellaini was adjudged to have pushed a defender as he rose to head the ball down to the Frenchman.

The winning goal came early in the second period and Fellaini’s head was again the source, as he nodded down to Rashford who did superbly to find space for a left-foot shot into the bottom corner.