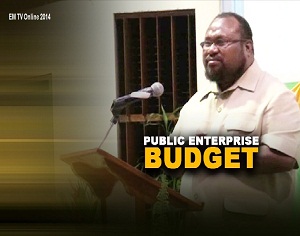 Mr. Micah said this was attributed to the sector’s large budget of close to K2 billion.

“Because our budget is very big, it was impossible to accommodate so the government has given us special authorisation,” Mr. Micah said.

They have been given special authorisation to raise capital outside of the budget.

He said the Independent Public Business Corporation (IPBC) together with National Petroleum Corporation and all other State Owned Entities have a combined balance sheet of more than K6 billion, with a combined turnover of about K4 billion.

He said that with the sector’s large balance sheet and combined turnover, Public Enterprise & State Investments is big enough to raise its revenue off budget.

“I want to thank the Prime Minister and Treasurer and NEC for giving us a special dispensation to do that off budget”, said Micah.