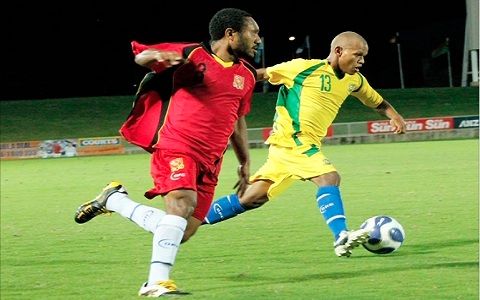 PNG recorded a first win against Solomon Islands in the Men’s Under 20 Oceania Football Confederation Championship, in the ANZ stadium in Suva, Fiji yesterday afternoon.

It was the final match of day 1 and a 2-nil win shines a pathway for PNG side to represent Oceania in the 2015 FIFA Under- 20 World Cup in Brazil.

Solomon Islands made an early foray into PNG side, but our boys showed class as they capitalized on the errors and successfully netting a first free kick to lead.

Solomon Islands  continued to  excite with their on- ball talents and had a wealth of shots on goal, but the finishing continued to elude them despite some valiant efforts which really tested Papua New Guinea’s Vagi Koniel in goal.

The final minutes of the match were fraught as Solomon Islands chased down an elusive goal, while Papua New Guinea battled to keep their lead a final goal at 2- nil at final hooter.