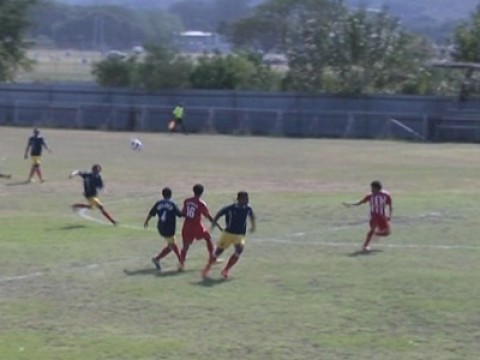 Momase FC in the Port Moresby Soccer Association’s Super League division beat Blue Kumuls two goals to one in an end-to-end encounter at the Bisini park in Port Moresby.

Leading one nil for much of the match, blue Kumuls hit back to level the scores before Momase struck again to ensure their 2014eason campaign was off to a good start.

The match started off slowly with Momase holding the ball early in their own half, hoping to draw out the Blue Kumul defence.

Momase were composed in defence and  had good counter-attack, spreading the ball from one end of the park and catching the Kumuls defence on the break down the opposite side.

The first goal came from a brilliant set-piece taken thirty metres out, Momase scoring from a header.

The kumuls hit back soon after, as a mistake inside the six yards gave a clear shot on goal for their young striker, who took the chance beautifully.

But apart from that first taste the Kumuls had rare opportunities and were at times out of sorts and at one stage, struggled to hold on to possession.

Momase were able to counter on the myriad mistakes that blue Kumuls made and captain Tagaia Lepani appeared frustrated with his teams lack of cohesion.

The win places Momase above mid-table with Blue Kumuls five places behind.

In other matches, Cosmos took on newly promoted Golo with both teams hoping to continue their good form of late.