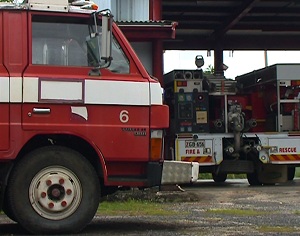 The Madang fire service has again raised concerns on their capacity to respond to fire emergencies in Madang.

This comes after a series of fires in Lae and Mt. Hagen that left many people questioning the ability of the PNG Fire service to respond to fire.

PNG’s emergency services have been hit hard, by public criticisms that label them as incompetent.
But performing their job to expectation is quiet difficult, the Madang’s fire fighters said.

“Fire stations should be equipped to meet the standard of the town…Madang is facing an economic boom. Our fire station needs an upgrade”, said Graham Wane, a Senior Fire Fighter.

Their ability is limited, as they don’t have the necessary equipment need to put out a fire in an instant.

Their story is no different to the rest of the other emergency services that is being provided else where in the country.

“We’ve only heard talks from our head office that there will be an upgrade to our equipments, and accommodation, we are still waiting” said Mr. Wane.

The PNG Fire service, capabilities and immediate response has so far come up to the fore, and has been widely criticized.
About two months ago, three fires destroyed properties in Lae in a span of a week.

In Mt. Hagen, seven shops were gutted by fire.

But like Madang, Lae and Mt. Hagen, their stories are similar.

They all need a major overhaul to the fire stations,new equipment, more man power and more staff accommodation.