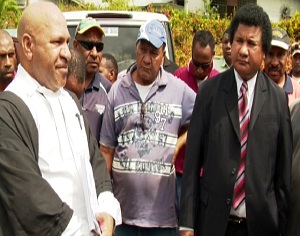 Suspended Parliament Clerk, Vela Konivaro’s request to have his suspension investigated by the National Court was dismissed.

The decision was handed down by Justice Collin Makail yesterday.

Following his suspension in August, Konivaro sought a judicial review by the National Court.

Konivaro was removed from office after National Parliament Speaker, Theo Zurenuoc received reports of allegations against him.

He argued that he was denied the opportunity to tell “his side of the story.”

His case was dismissed by Justice Makail on the grounds that the suspension was a disciplinary action by NEC.

After the court refused the judicial application, lawyer representing the State, Peter Kuman said parliament clerk is a constitutional position and is subjected to investigations.

This year, a number of people holding prominent positions in government offices, including members of parliament, have been taken to court following allegations of misappropriations.

In August, Pomio MP Paul Tiensten was imprisoned after he was found to have misused public funds.

Earlier this month, Gulf Governor Havila Kavo was also placed behind bars on charges of misappropriation.

Houses Destroyed in an Eviction