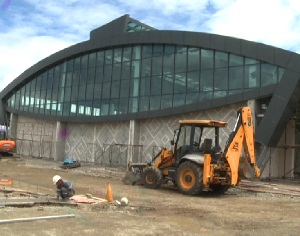 Kagamuga Airport in Western Highlands Province is setting the standard for airport facilities in the country.

For a growing city in Papua New Guinea, the K1.6 million project is coming of age in its design. Independent Facility Supervisor Lance Doyle says the new building is a step into the international arena for the National Airports Corporation (NAC).

Doyle is impressed with the standard set by the contractor, COVEC. He says the axe design gives ownership back to the locals, as well as pride in their culture and value to the facility.

A level three CCTV system will be installed to monitor the whole building. The domestic section will house a Paradise Club, executive lounge and a view to the runway. Chairman of the NAC, Peter Neville says the building will have an international component, which is just an extension but NAC is still seeking funding.

“All this work will be done before March next year for the opening,” Neville said.