Achilles Peni’s water treatment business was one out of 10 companies selected to participate in Papua New Guinea’s SME Advancement Program, led by the World Bank, the Government and Bank South Pacific PNG.

The company sells purified water from Port Moresby. It has long-term plans to build the first natural mineral and spring water facility in Papua New Guinea.

Peni, who is a water and wastewater treatment technologist with over 26 years experience, says the company will then be positioned to bottle water directly from the base of the Owen Stanley Range near the Kokoda Track.

There is a large potential market. According to a study by Water Aid, Papua New Guinea has the world’s worst access to clean water. It found that 4.8 million people in the country do not have clean water.

The Water Aid study says access to clean drinking water and sanitation is an issue for over half of Papua New Guinea’s population. The annual rainy season is also often followed by drought, which adds to the difficulties.

‘One way to support local producers is to increase taxes on imported goods.’ 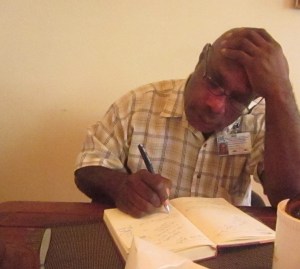 Peni says the company’s Lae branch initially operated ‘very well’ but the economic downturn meant that it had to be closed down. He says he has been forced to adopt a defensive strategy.

‘Millennium Water is surviving, but the company isn’t thriving.’

Peni lists his greatest challenges as high freight costs, and the lax application of importation taxes. He says many local businesses struggle to get their products transported to the buyers in a reasonable timeframe.

One way to support local producers, he says, is to increase taxes on imported goods.

‘The Government must promote local products first by imposing an import duty tax. These actions will help create a level playing field.’

Millennium Water has continued to be successful during the economic downturn by securing contracts with large companies, including PNG Power Limited and ExxonMobil.

‘Keeping the dispensers clean helps to maintain the light, sweet taste of the water.’

In addition, the company offers cleaning of its water dispensers free of charge, to attract and maintain its client base.

Keeping the dispensers clean helps to maintain the light, sweet taste of the water, which makes the product competitive, Peni explains.

In brief: Employment Act review underway, and other business stories