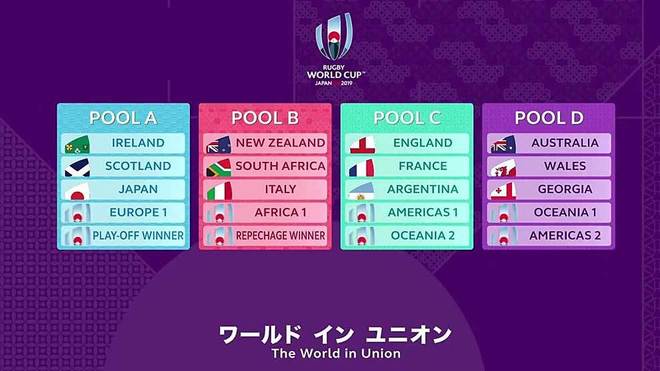 KYOTO, Japan (Reuters) – In-form England were drawn in the toughest pool for the second straight Rugby World Cup when they were grouped with France and Argentina for the opening round of the 2019 tournament on Wednesday.

New Zealand’s bid for a hat-trick of titles will start against fellow southern hemisphere power South Africa and Italy in Pool B, while hosts Japan will take on Ireland and Scotland in Pool A at the start of Asia’s first Rugby World Cup.

Australia, twice champions and runners up two years ago, will become reacquainted with Wales in Pool D, which also includes 11th ranked Georgia.

The All Blacks and England, currently the top two teams in the world, would meet in a tantalising semi-final if they both won their pools and got through their quarter-finals.

Only 12 teams were in the draw at Kyoto’s State Guest House with the other eight nations yet to qualify from various regional tournaments.

England, the 2003 champions, went on an 18-match winning run after being knocked out at the pool stage when they hosted the tournament in 2015 from a group including Australia and Wales.

The Six Nations winners face another tough start against France, three times losing finalists, and Argentina but England coach Eddie Jones scoffed at the idea it was a deadly draw.

“Who is calling it a group of death?” he asked. “It’s simple. Prepare well. It’s a prospect we are excited by.”We want to win the World Cup in 2019, and to win it we need to be ready to play and beat anyone.”

France coach Guy Noves said it was a “balanced” group.

“We are aware that the game against Argentina will be decisive,” he said. “We have two years to get ready.”

Pool C will be rounded out by the United States or Canada as well as one of Fiji, Tonga or Samoa with only the top two teams qualifying for the knockout stages.

“We are in a very tough group, and England and France will not be the only teams in that group to watch out for,” said Argentina coach Daniel Hourcade.

South Africa’s slump to seventh in the world means the 1995 and 2007 champions will face the All Blacks in the pool stage for the first time in a blockbuster clash.

Steve Hansen, whose New Zealand side were barely tested in their pool at the 2015 tournament, said he was pleased to be in a group that would provide “some challenges”.

“(South Africa) are a team that knows us very well, we know them very well and there’s a lot of good history between the two teams,” he said.

“Hopefully we’ll both play really great rugby and inspire the tournament to go to a higher level.”

Japan will be reunited with the Scots, who they lost to when they exited in the pool stage in 2015.

The Brave Blossoms stunned South Africa two years ago at the tournament in England, however, and will certainly not view reaching the quarter-finals on home soil as mission impossible.

“Any pool that we were going to get put in was going to be a big challenge,” said coach Jamie Joseph, whose side will face the Irish in two tests next month.

“But now there’s some certainty around it, we can start our planning and we’re really looking forward to it.”

Twice champions Australia will be confident of topping their pool having won their last 12 games against the Welsh, even if the Georgians will present a huge physical challenge in their first meeting with the Wallabies.

If they win the pool, Australia would face the second place team from England, France and Argentina’s pool in the quarter-finals, but coach Michael Cheika said figuring out the possible permutations was not that important.

“You can plan the lay of the land, know the teams you’re playing, know who the potential cross-over teams are, you can do the homework but at the end of the day it’s all about how we play,” he said. “You have to win seven games to get there.”

United’s eggs in one basket for Champions League push

The Weekend Warm Up – Part 1

POM AFL into Third Round of Pre-season Matches