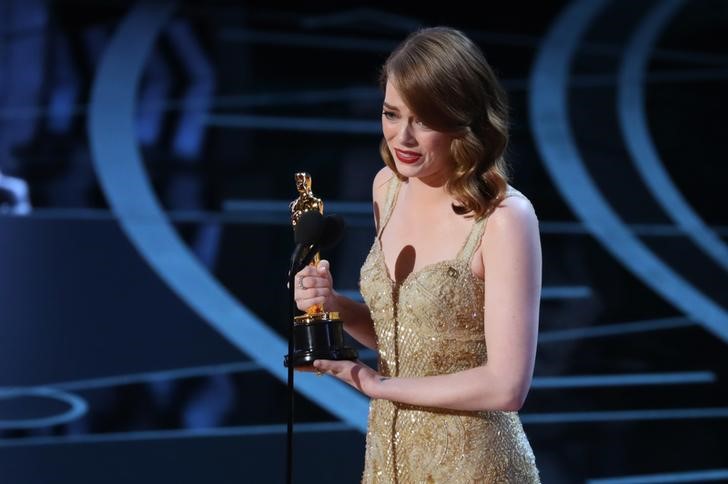 LOS ANGELES (Reuters) – Emma Stone won her first Oscar on Sunday for her lead role as a struggling actress who falls in love with a jazz musician in musical romance “La La Land.”

Stone, 28, plays Mia, a determined actress who tries to carve her own path in Hollywood, in a film that captures the fantasy and reality of falling in love against the backdrop of a dreamy Los Angeles.

The actress beat previous Oscar-winners Natalie Portman and Meryl Streep as well as France’s Isabelle Huppert and Irish-Ethiophian Ruth Negga for the accolade.

Stone had been seen as the frontrunner for the Oscar after winning Golden Globe, BAFTA and Screen Actors Guild awards.

“I still have a lot of growing and learning and work to do and this guy is a really beautiful symbol to continue on that journey and I am so grateful for that, so thank you so much,” Stone said as she held her Oscar.

Stone, known for her red hair and wide eyes, has showcased her comedic prowess in a slew of films over the past decade from her breakout in 2007’s raunchy “Superbad” to leading roles in high school comedy “Easy A,” “The Help” and “The Amazing Spider-Man.”

Stone also won attention while dating her “Spider-Man” co-star Andrew Garfield for about four years. The media-shy couple split in 2015.

She was previously Oscar-nominated in the supporting actress category in 2015 for dark comedy “Birdman.”

Director Damien Chazelle said he hoped the pairing would bring to mind Golden Age movie couples such as Fred Astaire and Ginger Rogers or Humphrey Bogart and Lauren Bacall.

SpaceX to send privately crewed spacecraft beyond the moon next year

Adele to perform at 2016 Grammys