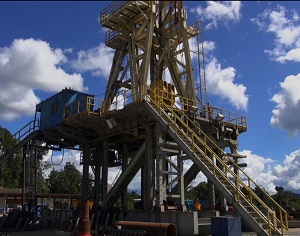 Petroleum and Energy Minister Nixon Duban said the Elk-Antelope gas field in the Gulf Province has potential for LNG development.

The Minister said the national government is expecting oil and gas companies InterOil and Total to develop the site into the preferred concept of a LNG plant site. The Elk-Antelope gas field has not been recognised as a player in the gas industry; however, Minister Duban said it has the potential to double the nation’s current LNG output.

Yesterday, the Minister visited the Raptor well site, which was discovered last week. Moreover, attention was given to InterOil and its new partner Total, including Oil Search Limited, to work together in developing gas fields in the Gulf Province.

Meanwhile, InterOil CEO Dr Michael Hession said the three companies will not stop in developing the gas industry in the country. The Minister was accompanied by National Petroleum Company Managing Director Wapu Sonk to the gas field yesterday.