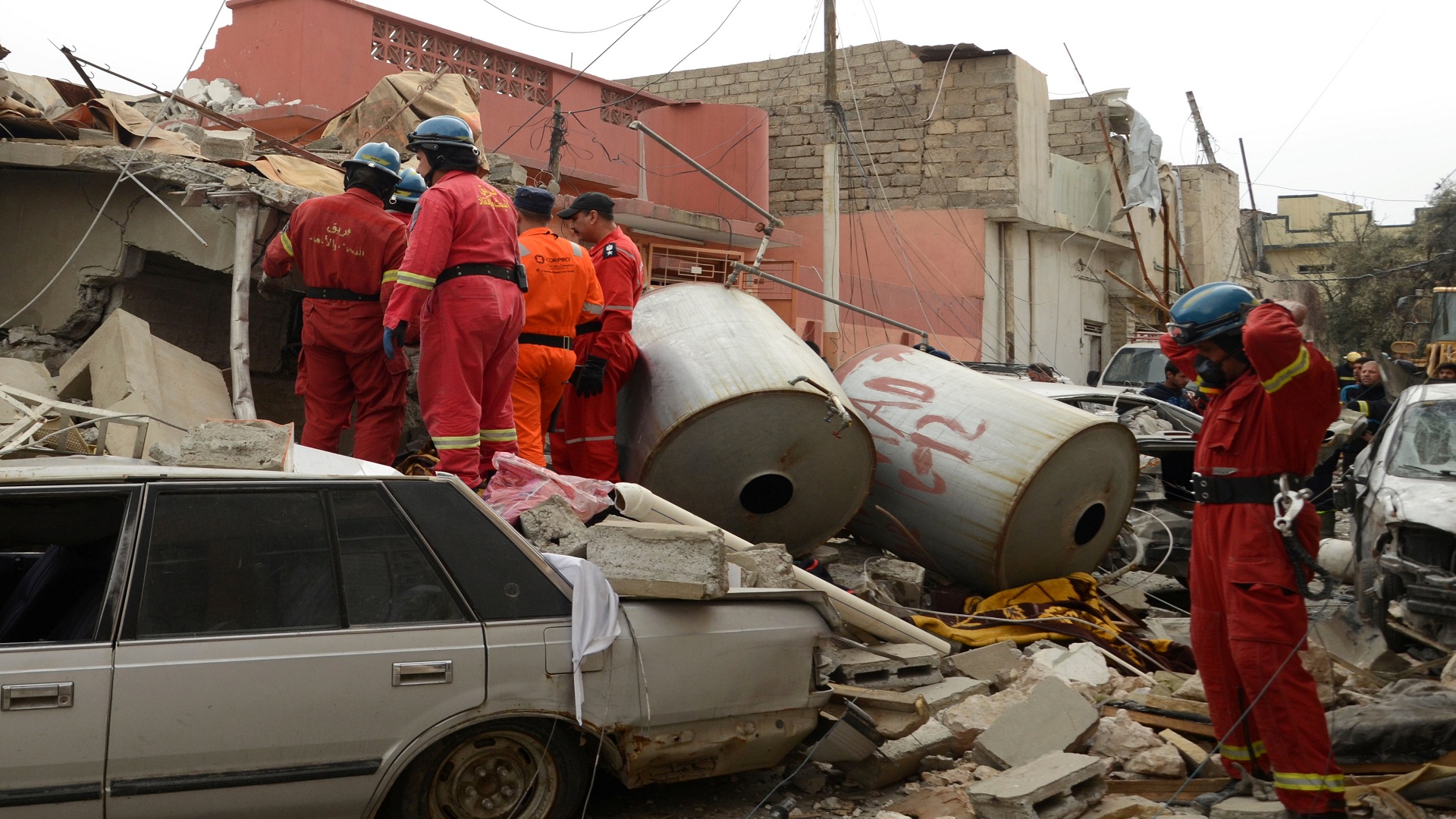 Image: Firefighters search for the bodies of civilians who were killed after an air strike against Islamic State triggered a massive explosion in Mosul, Iraq, March 22, 2017. REUTERS/Stringer

BAGHDAD (Reuters) – Dozens of residents were buried in collapsed buildings in the Iraqi city of Mosul after an air strike against Islamic State triggered a massive explosion last week and rescuers are still recovering bodies, civil defence agency officials and locals said on Thursday.

The exact cause of the collapses was not clear, but a local lawmaker and two local residents said air strikes by the U.S.-led coalition targeting Islamic State militants may have detonated a truck filled with explosives, destroying buildings in a heavily populated area.

Civil Defence chief Brigadier Mohammed Al-Jawari told local reporters that rescue teams were retrieving bodies from under the debris in the Mosul Jadida district near Rahma hospital, the site of heavy fighting between Iraqi forces and Islamic State.

Reports of numbers of civilian casualties varied greatly after last Friday’s air raid. But Jawari was quoted by al-Mosuliliya channel in a statement saying teams had so far recovered 40 bodies from buildings that collapsed.

“Finding survivors is very difficult because the area is completely destroyed,” he told reporters. “It’s a very big disaster, indeed we can describe it as a disaster.”

The coalition did not give details on any specific air strike or comment on a Mosul Jadida district operation.

“We are aware of reports on airstrikes in Mosul resulting in civilian casualties. The Coalition conducted several strikes near Mosul and we will provide this information to our civilian casualty team for further investigation,” the coalition said in a statement.

One Iraq official put the total casualties at more than 137. Bodies were believed to be still buried inside collapsed homes.

“You can’t kill dozens just to destroy a booby-trapped truck parked near houses,” he said.

One witness told Reuters heavy air strikes in the area began on March 7, but on Friday a strike hit a massive Islamic State truck bomb in a residential area, which exploded and destroyed seven homes where dozens of people were hiding.

Another resident said 25 homes were damaged. With fighting still going on, residents have been unable to recover bodies since the strike, the resident said.

Rights groups have expressed concern over the mounting civilian death toll, with Islamic State fighting among homes and densely-populated areas as the campaign to defeat the militant group in its last Iraqi stronghold enters its sixth month.

Iraqi military and U.S.-led coalition have been countering with heavy weaponry and air strikes to support troops on the ground moving into the narrow alleyways of Mosul’s Old City.

Families fleeing Mosul have talked of high numbers of civilians killed by air strikes, and said that in many cases Islamic State fighters using homes as cover have already slipped away by the time airstrikes hit. Other displaced residents say they have been forced to act as human shields.

U.S. backs call to save oceans, but notes plan to quit climate deal