Cooperation amongst the energy majors in Papua New Guinea is leading to greater efficiency and higher international standing, according to industry leaders and analysts. What is happening in PNG appears in stark contrast to recent experiences in Australia’s LNG industry.

In the opinion of Peter Botten, Chief Executive of Oil Search, PNG has avoided the ‘duplication’ of operations and capital expenditure that occurred in Gladstone in Queensland, which led to a ‘really challenging economic outcome for a range of developers there.’

Botten said, at the recent Australia-Papua New Guinea Business Council Forum in Port Moresby, that there could be significant saving on capital costs if the PNG LNG and Papua LNG projects cooperate on a two train project.

‘We think there is between US$2 and US$3 billion of downstream cost savings that could be realised if we are able to co-operate between the projects,’ he said.

Botten added that the cooperation could lower operating costs by about US$125 million per annum.

He said the participating companies are ‘having discussions, although it’s early days,’ on how cooperation can take place.

‘You have to say that PNG at this stage would in fact be ahead of Australia, in terms of preferred exposures by energy companies,’ he tells Business Advantage PNG.

‘It was a difficult environment in which to build these things, a tropical environment. They were almost hand-crafted platforms, so they needed to cooperate with each other across a number of areas.

‘That really didn’t happen in Australia. You look at Gladstone, for example. They had a number of trains built. They all competed for the local housing, and for hiring of the work force.

‘They went down different roads in terms of how the trains were developed. There was no co-operation at all.

‘That was the difference between what happened in PNG and the successful delivery of the LNG train.’ 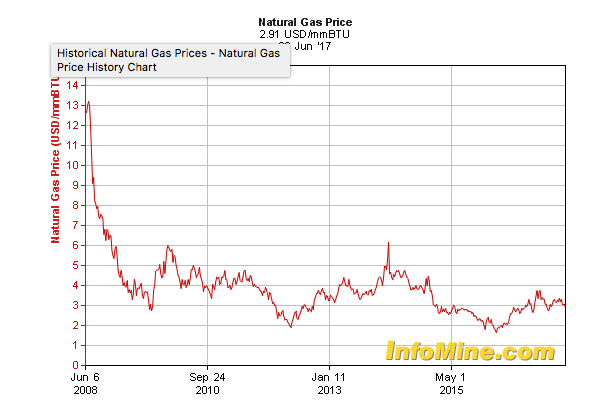 The gas price since 2008 Source: Infomine

The current gas price is close to the level in 2009 (see chart). Andrew Barry, Managing Director of ExxonMobil PNG told the forum that today’s price environment is similar to when the PNG LNG project commenced. 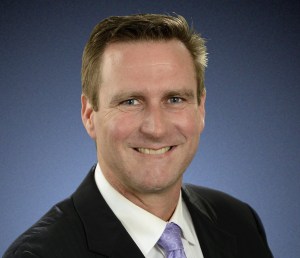 ‘When you reflect on the business environment in 2009, when we embarked on PNG LNG project, it really is not dissimilar to where we are today. The same level of teamwork, co-operation and partnership will be required.’

Barry said PNG’s resources are not easy to commercialise.

‘Many companies have tried and failed. We are drilling some of the most complex wells in the corporation.’

Lennox says the balance between supply and demand has changed over the last eight years. In  2009, the price had fallen by more than two thirds in a year (see chart above).

‘Back when we saw the first collapse, it was primarily on the back of a belief that LNG was a bit like lithium—it was just coming into its own,’ says Lennox. ‘There was this talk of LNG being the energy provider of the future.

‘The role of the PNG government was also important.’

‘The price really shot off and then, as with all rallies, it tended to come to a sad end.

‘What we saw was that a number of LNG trains were built in Australia and around the world and that really has adequately met demand. Once the product stabilised—post the first euphoria—we have now seen a lack of euphoria.’

‘Australia, down the East Coast, has got a significant problem.’

‘Australia, down the East Coast, has got a significant problem.’

He says PNG does not have the same pressures.

Oil Search’s Peter Botten and Fat Prophets’ David Lennox will be speakers at the Papua New Guinea Investment Conference, to be held at the Shangri-La Hotel, Sydney, Australia on 7 & 8 September this year.