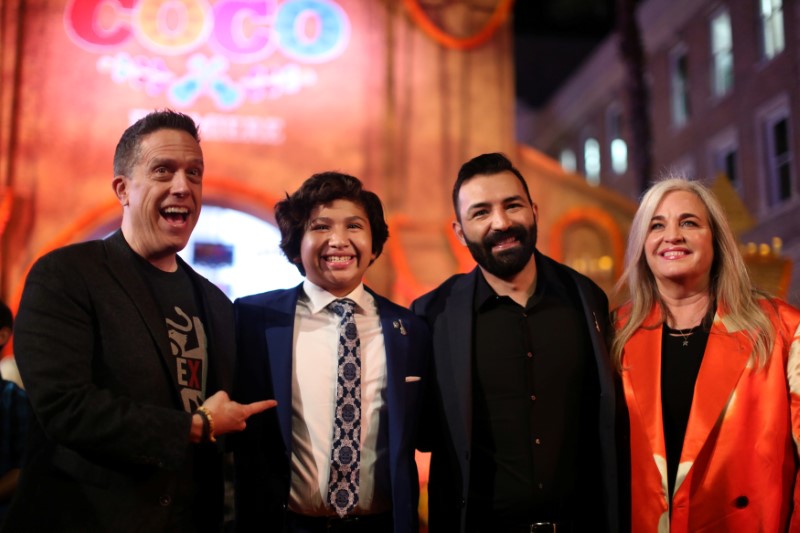 “Coco” joined “The Hitman’s Bodyguard,” “Fate of the Furious” and “Split” as 2017 titles to top the domestic box office for three weekends in a row. The major studios have held off on any new openings since the Thanksgiving holiday but that changes on the evening of Dec. 14 when previews start for Disney-Lucasfilm’s “The Last Jedi” amid expectations of an opening weekend in the $200 million range.

“Coco,” a colorful celebration of Mexico’s Day of the Dead, showed impressive holding power with a 33% decline from its second weekend to lift its 19-day domestic total to $135.5 million. It’s performed similarly to Disney’s animated “Moana,” which opened at the same time last year and had totaled $144.7 million after three weekends.

There was a single wide opening this weekend with Broad Green Pictures’ final movie, “Just Getting Started,” showing little traction with moviegoers with $3.2 million at 2,146 locations. “Just Getting Started,” a poorly reviewed action comedy starring Morgan Freeman and Tommy Lee Jones, wound up in 10th place behind A24’s sixth weekend of awards contender “Lady Bird” with $3.5 million at 1,557 venues.

The fourth weekend of Warner Bros.-DC Entertainment’s superhero team-up “Justice League” finished with just over half of “Coco” with $9.6 million at 3,508 locations with a 42% decline. “Justice League” has taken in $212.1 million in 24 days and is the 10th biggest movie of 2017 — but it’s also the lowest performer among the five DC Extended Universe movies. “Wonder Woman” had hit $318 million domestically at the 24-day point in June.

“Justice League” has gone past $600 million worldwide with an international total of $401 million. Its performance pushed Warner Bros. past the $5 billion mark worldwide for 2017. The studio announced Sunday that it’s become the first studio to cross the $2 billion mark for the year, led by “Wonder Woman” with $412 million and “It” with $327 million.

Lionsgate’s third weekend of inspirational drama “Wonder” finished in third place with $8.5 million at 3,519 North American sites with a 35% decline. “Wonder” became the 27th movie of the year to cross the $100 million mark — and one of the least costly among that group, given its $20 million budget. Production companies on the Jacob Tremblay vehicle are Mandeville Films, Participant Media, Walden Media and TIK Films.

A24’s expansion of James Franco’s comedy-drama “The Disaster Artist” came in fourth with a solid $6.4 million at 840 venues, up from 19 last weekend. That edged the sixth weekend of Disney-Marvel’s “Thor: Ragnarok” with $6.3 million at 3,047 sites, which put its domestic total above $300 million. The third Thor movie was a key factor in November’s box office staying ahead of the same month last year.

Fox’s fifth frame of “Murder on the Orient Express” followed with $5.1 million at 3,201 sites for a total of $92. 7 million. The Kenneth Branagh vehicle, which has a $55 million budget, has been a solid performer internationally with $182 million in grosses outside the U.S.

Sony’s fourth weekend of faith-based animated drama “The Star” came in eighth with $3.7 million at 2,976 venues, off only 10%. The film, co-financed by Walden Media and released through the Affirm label, has totaled $32.3 million in 24 days.

Madang Teacher and Para-athlete, an Inspiration