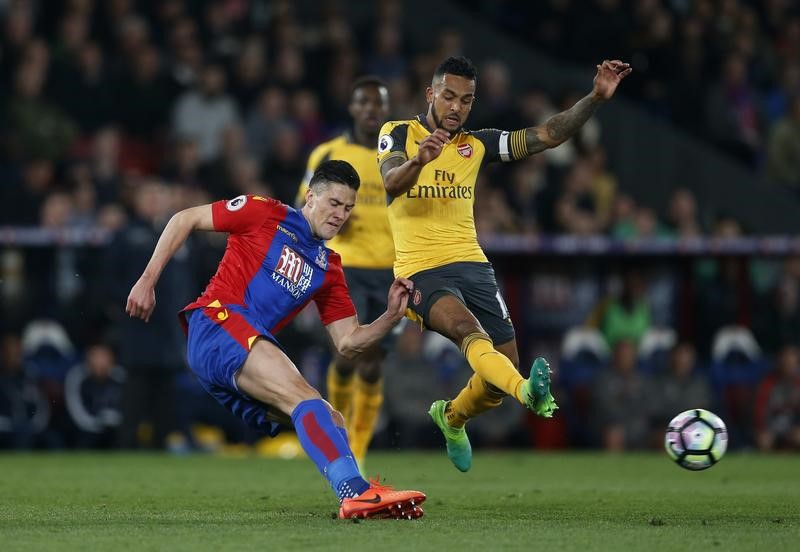 Arsenal’s hopes of finishing in the Premier League’s top four suffered a potentially fatal blow as they suffered a humiliating 3-0 defeat at relegation-threatened Crystal Palace on Monday.

Victory had been imperative for an Arsenal side that had won only two league games since January but the abject display with Andros Townsend, Yohan Cabaye and Luka Milivojevic all scoring for Palace only heaped more pressure on manager Arsene Wenger.

Sixth-placed Arsenal, who have finished in the top four in 20 consecutive seasons under Wenger, now have 54 points from 30 games — seven points behind fourth-placed Manchester City, who have played a game more.

“It’s damaging of course,” a seemingly dispirited Wenger told Sky Sports when asked about how serious the blow was to their chances of Champions League football next season. “That’s the most difficult thing for us tonight.”

Rejuvenated Palace, winners of four of their previous five league games under Sam Allardyce, started confidently and opened the scoring when former Tottenham winger Townsend swept the ball home at the end of a smart passing move after 17 minutes.

Palace striker Christian Benteke then had a goal ruled out for offside before Cabaye’s superb curled effort and Milivojevic’s penalty in five second-half minutes completed a miserable night for Wenger at a raucous Selhurst Park.

Palace stay 16th but now have 34 points from 31 matches, six more than Swansea City, who occupy the final relegation place in 18th and have played a game more.

“All we can do is apologise for that performance,” Arsenal’s Theo Walcott said after Arsenal fans had sung ‘You’re not fit to wear the shirt’ at their players.

“It was a great three points and a well needed-three points,” Townsend said.

“Sam Allardyce has been incredible. He looks to have worked his magic again.”

Arsenal settled into a period of possession but Palace were a constant threat on the break and it was a long ball from a goalkick that yielded the breakthrough.

After Benteke won a header, a neat passing move ended with Townsend stroking home a cross from the slipping Wilfried Zaha, high past Emiliano Martinez.

In response Arsenal created a few chances via Alexis Sanchez but the hosts looked capable of scoring whenever they ran at Arsenal’s fragile defence.

Benteke had a goal ruled out for offside after the break before Palace added a well-deserved, quickfire brace.

First, Cabaye met Zaha’s cross with a superb, first-time effort before the impressive Milivojevic converted from the penalty spot after Townsend was fouled.

Without some desperate last-ditch defending Palace, revitalised in their past six games, could have scored further goals.

Soccer helps young refugees take a shot at new life in the U.S.

Serena storms into third round in Toronto