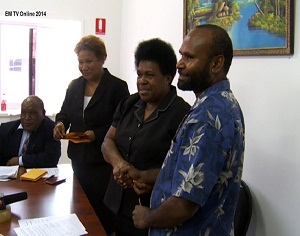 Manus Province will be the host of the 2014 International Disability Day.

Community Development Minister, Delilah Gore, while making the announcement in Port Moresby said that the department’s flagship must be made known to all provinces, as a family unit.

The department, for the first time, has initiated a strategy to celebrate the World Disability Day in different provinces.

Other provinces will also celebrate to advocate on rights of people with special needs, as equal citizens of Papua New Guinea.

Minister Gore also announced the National Disability Policy review is complete and will soon go before cabinet. It demonstrates the government’s role with development partners and incorporates the direction on pension and national ID card requirements.

A musical concert will be hosted on December 16 to raise funds for children and people with special needs.

It will be an annual event to support programs carried out by the Community Development Department.