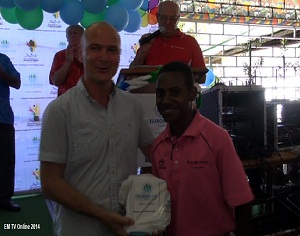 14 year old, Vagi James from Eastern Highlands and Oro, was all-smiles when awarded the best golfer of the 2014 Telikom PNG Golf Pennant, at the pennant’s closure on Sunday.

A very talented and skillful young golfer, Vagi recorded high points on the course to claim the 2014 Best Golfer award.

Nicknamed ‘giant killer’ by his comrades on ‘Team Ela Motors’, the young lad had everything going for him and is sure to be a delight to watch, as he grows from strength to strength in the sport of golf.

Vagi started off as a caddy, and debuted onto the golf scene in 2011; doing extremely well for himself and his team at the Telikom sponsored Golf Pennants.

The tournament teed off in March this year; a 18-hole course, which saw keen golfers come together on the third Sunday of every month at the Port Moresby Golf Club.

This year saw Team Khumo Tyres, edging out the 2013 Telikom Golf Pennants champions, Ela Motors, to claim this year’s title, with team Starland Dragon taking out the runner up title.

Other teams who also took part were Mirupasi Lawyers, DHL and Bank of South Pacific, with sponsors Telikom.

All golfers were grateful to Telikom for their sponsorship and support of the golf pennants, and for the many delights provided by the telecommunications company, such as the free Wifi service on location, every Sunday.

CEO of Telikom PNG, Michael Donnelly, is showing keen interest to continue the Telikom PNG support to the Golf Pennant.

Easy Pay Meters to be installed in 4, 132 Police Houses nationwide