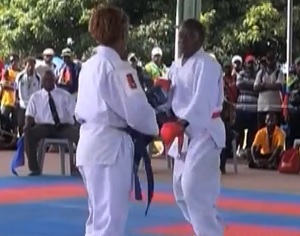 The Papua New Guinea Karate-do Federation (PNGKF) is on a mission to nurture and identify potential medal prospects for the 2015 Pacific Games.

Following the successul staging of Karate at the PNG Games, many potential talents were identified for the national training squad. PNG Karate-do President, Carl Mari is preparing for a mammoth task.

The Federation is serious about a pathway to the 2015 Pacific Games and is not taking lightly the amount of time spent to perfect their art.

The PNG Games was used to identify talent, not only in quantity but quality to notch up the medal tally in Karate at the Pacific Games.

From the PNG Games, the PNGKF has discovered new talent.

Host province Morobe’showed class with what they had, chipping in four new talents the likes of Donald Samuel, Willie Gaida, Phyllis Bibuai and Wayne Goa. Beverly Wasawa and Hillary Arnette were scouted from Bougainville and two were scouted from Northern Province. Two were from Western and one was from East New Britain and Gulf.

West New Britain were fortunate to have Romanus Asiange and Tom Bai Ramey. They are now part of the PNGKF training squad and will be included this month to January 2015 Training Camp in Port Moresby for the coaches to have a full assessment of them.