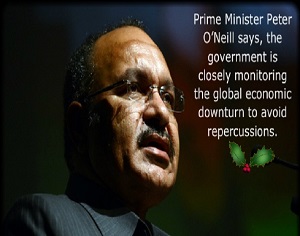 The eight per cent economic growth per annum should be a reminder to the nation to stay focused.

Prime Minister Peter O’Neill indicated in his Christmas message that the government is committed to steering the nation away from challenges.

Interest rates and inflation have remained steady, while foreign reserves are at high enough levels to cater for six months of imports.

The government’s strong investments in health and education have been a priority.

He says the level of investments in these sectors of the economy will be maintained throughout the coming years.

Concerns have also been raised about the decline in oil prices that has affected some of the country’s major trading partners.