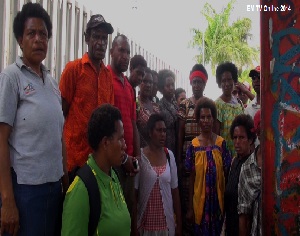 Over 100 general service workers of the Port Moresby General Hospital have not received their Christmas pay. Talking to EMTV News this morning, frustrated workers voiced their worries saying they will not celebrate Christmas.

Mathias Siba who has worked in the hospital for over 30 years as a casual employee, says only permanent workers were given their pay last Tuesday.

He said the management of the hospital told the police to remove them yesterday from the hospital premises when they went to demand payment.

Another worker, Sineh Gomena says for the last 10 years he has been a casual worker. There were no proper contracts signed between them and the hospital’s management.

Gomena said casuals were the back-bone of the hospital and he has called on the Health and Labour Departments to come in and assist them.

Attempts to get in touch with the management of the hospital were unsuccessul, however, EMTV News was informed by a management staff this morning that all the workers’ pay were sorted out, although the workers themselves have said that have not received wages owed to them as yet.