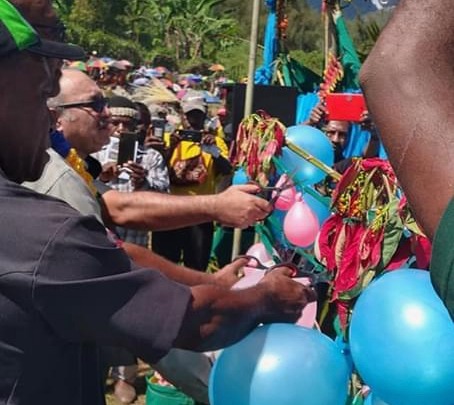 PNC Leader, Peter O’Neill has recently highlighted the value of District Services Improvement Program funds in delivering infrastructure and services while the current National government was failing to manage the country’s economy.

O’Neill said the classroom is being built because of the good work of the local Member of Parliament and will be used to educate the children of Kabwum in the years to come.

“The opening of this classroom is another example of DSIPs and PSIPs delivering to remote and rural districts.

“DSIPs and PSIPs are being used by Members of Parliament to expand schools, dormitories and staff housing for education.

“Marape has been playing political games and holding back DSIPs from Members he is looking to undermine, and this is nothing but an indication of his lack of virtue. This childish politics will not stop us from working hard for our people.”

The former Prime Minister stating that while DSIP finds have been slow in being obtained; once made available, they’ve been put to good use.

He thanked the people of Australia, who paid the last amount of DSIP and PSIP funding though the Australian Government’s Export Finance Agency.

“While the legality of this loan through the EFA was questioned, and was against the advice of the Australian Treasury, it did enable PNG Members of Parliament to receive these funds into trust accounts and makeup for Marape Government shortcomings.

“It now remains to be seen how the government will obtain funds for the next tranche of DSIPs and PSIPs.
“Ultimately these funds will be put to good use as a last line of defence for our people in the delivery or essential services and infrastructure.