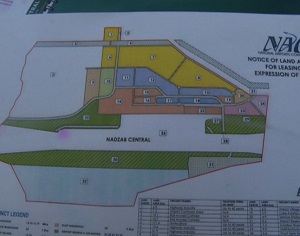 The National Airports Corporation (NAC) has drawn up a master plan to develop Nadzab Airport into a city.

Acting Chief Executive Officer of NAC, Joseph Tupiri says the plan will have a huge impact on Morobe and the country’s economy.

The plan was revealed to National Planning Minister, Charles Abel last Sunday during a visit to Nadzab Airport. Tupiri says the ultimate plan is to expand the airport and make it an alternative to Port Moresby.

He revealed to the National Planning Minister that Nadzab has the potential to become an inter-model hub for land, sea and air transport. Part of the development includes the building of residential houses, a commercial sector, aviation services, schools and other relevant institutions to make a city.

These developments come as Lae is seeing millions pumped into the province by the national government for projects such as roads, the Tidal Basin and Angau Hospital. NAC Chairman Peter Neville says the plan compliments the government’s intention of making Lae an economic corridor the economic corridor of PNG.

A number of investors, including development partners are going through the master plan; a memorandum of understanding has been signed for groundwork to start.

Health centre neglected for over seven decades to be refurbished