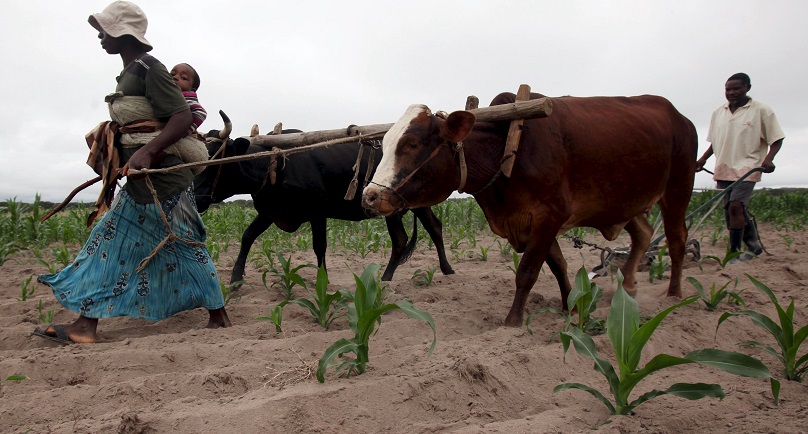 MAFOMOTI, Zimbabwe (Reuters) – In the dusty village of Mafomoti, southern Zimbabwe, farmers have already lost cattle and crops in the severest drought to hit the nation in a quarter of a century. But the worst may be yet to come.

Midway through the farming season, the fields around the village are normally green at this time of the year but now they lie barren. Local people, who should be looking forward to the harvest in late March, are instead awaiting its failure and wondering how to make do with meager supplies of food aid.

“It will not take us far so we will have to eat sparingly,” said Jesta Kugarira, 65. Apart from a few showers in mid-January, it hasn’t rained in Mafomoti since September and her maize, millet and sorghum crops have been destroyed.

Kugarira, who has 12 children and grandchildren aged between three and 24, said her family is surviving on one meal a day. She has just six kg (13 pounds) of cereal, two kg of beans and some vegetable oil that she has received from the United Nations World Food Programme (WFP) to keep them fed for a month.

The drought is likely to damage harvests across southern Africa and about 14 million people are at risk, the WFPsays.

But whereas neighboring South Africa is wealthy enough to tackle the problem of food shortages, the impact is looking particularly serious for Zimbabwe where 70 percent of the population still survives on farming.

Zimbabwe’s economy has been struggling for five years to recover from a catastrophic recession that was marked by billion percent hyperinflation and widespread food shortages.

Strained relations between President Robert Mugabe and aid donors such as the European Union have complicated matters.

Agriculture is critical to Zimbabwe’s economy, generating 30 percent of export earnings and contributing 19 percent to GDP. But a report by the government and international aid agencies last year’said 16 percent of Zimbabwe’s population – which numbers 13 million – required food up to March 2016.

PRIZED POSSESSIONS
In drought stricken areas, emaciated cows root around the bare earth trying to find something to eat. Some livestock are too weak to stand while birds flock around the carcass of a dead donkey.

Villagers said they were being forced to sell their surviving cattle, prized possessions in rural Zimbabwe which families usually keep to fund future family expenses such as educating the next generation.

“Livestock was our bank because people expected to sell and raise money for school fees, but they are all dying and there are no pastures. If you look around you, it’s just barren,” said Luxon Mabvongwe, a 50-year-old father of 11.

Whereas food prices usually rise in times of drought, the opposite is true of livestock in Zimbabwe at the moment. With animal feed so scare, farmers are selling cows for as little as $50 compared with at least $400 they would get in better times.

Harare plans to import up to 700,000 tonnes of maize and has secured a $200 million loan to import grain.

The EU has urged Mugabe’s government to declare a food emergency, allowing international donors to raise money quickly to provide more food aid. Vice President Emmerson Mnangagwa has said only that Harare is already providing food imports but is open to assistance.

Relations between Brussels and Harare remain fraught. The EU, which imposed sanctions in 2002 over electoral fraud and human rights abuses, has renewed measures including a travel ban and asset freeze on Mugabe and his wife until next month.

Some villagers in Mafomoti are considering trekking the 100 km to the South African border to look for food. However, the continent’s top maize producer is suffering from the same drought and could reap its smallest maize crop in a decade this year, a Reuters poll showed.

Josphat Ngwenya, the local chief, said the long-term consequences of the drought went well beyond food shortages. “Most households will collapse and many children will fail to go to school,” said Ngwenya.